This is a 90s sitcom that I have been interested in seeing for a long time, and here’s why. Graham Linehan and Arthur Mathews were an Irish duo who wrote a lot of comedy together, and contributed to shows including Smith And Jones and The Day Today. In 1994 they wrote a sitcom for Channel 4 called Paris. This is all-but forgotten now, and all I remember seeing at the time is a trail, but some episodes have been uploaded to YouTube by “MrNoosphere”, so credit goes to them.

Paris was set in 1920s France and starred Alexei Sayle as the short-tempered artist Alain Degout. He is somewhat struggling with his work and will do anything to be famous. His rather dozy colleague is Paul Rochet (Neil Morrissey). Also appearing is the psychiatrist Minotti who says things like “no more monsieur nice guy”. Along the way we meet a variety of characters in the great and thriving city including many gentlemen with distinguished moustaches.

There were also guest appearances from some familiar faces including Windsor Davies (although he didn’t have any boxes of concentrated jelly with him unfortunately), John Bird, Patrick Marber, and a rather glamorous looking Rebecca Front who it is always a pleasure to see turn up in comedy shows. Paris was definitely a show that was full of energetic performances, with a lot of shouting, and bizarre physical comedy including people falling over or randomly jumping out of windows. 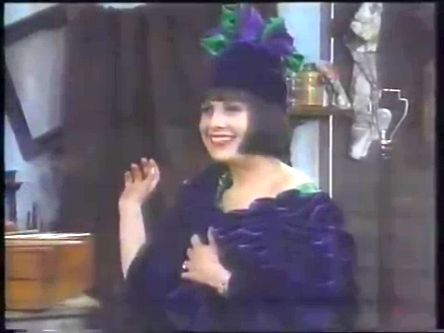 Paris ran for six episodes, I think it was repeated only once rather late at night on Channel 4 not long after its original run, and it hasn’t been seen on TV since. It has not been released on DVD either. Linehan and Mathews (who also appeared in one episode) must have thought that they had blown their chance of creating a successful sitcom, but as it turned out of course they needn’t have worried. 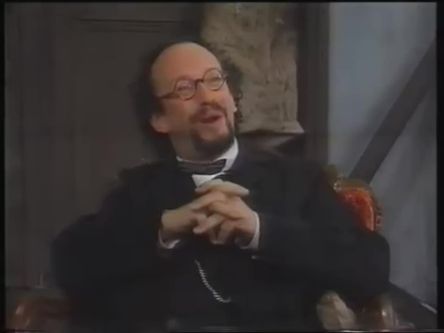 This was because their second sitcom for Channel 4 that launched a year after Paris was Father Ted, which went on to become one of the most successful comedy shows of its era, be constantly repeated, and it remains fondly thought of by viewers to this day. We should be grateful that after this flop Channel 4 continued to have faith in them. If you could make a comparison between Paris and Father Ted I suppose it could be with some of the interplay between Alain and Paul, he was definitely the Dougal to his Ted, along with the plots taking unusual twists.

Also, every episode title was in French, but nobody in the show actually spoke with a French accent. When compared to Father Ted, Paris was always going to come off as second best, but I was pleased to have finally seen some of it for myself, and it contained a lot of amusingly anarchic moments that gave a few hints of what great things were to come.