After the success of The Office, which received a huge amount of praise from critics, Ricky Gervais was suddenly a big name in comedy and there was a lot of anticipation about what his next show would be. Extras starred Gervais (also the co-writer and co-director) as Andy Millman, who worked as a film extra, meaning that he stood around a lot in the background of various films, but he craved the chance to have a leading role of his own.

Also appearing is Maggie (Ashley Jensen), a friend of Andy’s who is also an extra who similarly has trouble getting any work and often causes trouble for everyone. Guest stars practically queued up to appear in Extras, suddenly everyone wanted to be Gervais’s close showbiz mate, and among those who featured playing exaggerated versions of themselves were Keith Chegwin, Ross Kemp, and Les Dennis having a meltdown in a pantomime.

By the second series, Andy has managed to get a part in the BBC1 sitcom When The Whistle Blows, but he becomes frustrated by the amount of editorial interference in the show, complaining that the producers think all viewers want is wigs and terrible catchphrases, canned laughter, and Liza Tarbuck in the cast. At least these were the days when there were sitcoms regularly on BBC1, however good or bad they were.

The other main cast members in Extras were Andy’s agent Darren (co-writer and co-director Stephen Merchant) and the fat bloke who used to be in EastEnders. I must admit that I enjoyed most of their interaction more than Andy and Maggie’s mishaps, I think that they should’ve been given their own spin-off sitcom showing how mundane fame can all be, or at the very least Andy could’ve done a dance to liven up things. 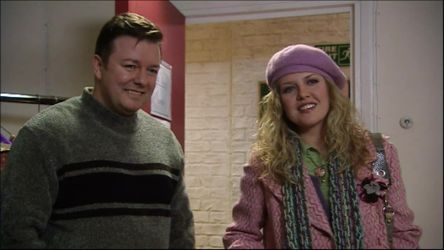 After a couple of series, all of this concludes in the final episode when after quitting his sitcom Andy finally realises that fame really isn’t all it’s cracked up to be as he watches helplessly in the Celebrity Big Brother house as Lionel Blair’s back goes. And Barry’s dream finally comes true when he gets a job at The Carphone Warehouse. Is he havin’ a laugh? 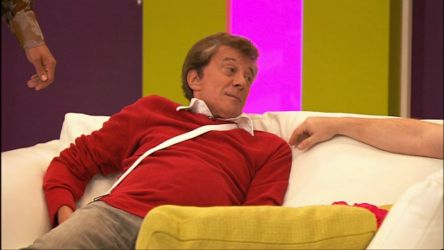 Just like The Office, Extras ran for two series and concluded with an extended Christmas special. This definitely was yet another “you’ll cringe more than you’ll laugh” sitcom, and again it rated rather well with critics. These shows opened up a lot of doors for Gervais, who went on to star in various films including Ghost Town and The Invention Of Lying. And who would’ve thought it, in the space of barely five years he had gone from shouting at people on small-time local radio stations to hobnobbing with all the fancy Hollywood stars and indeed becoming one himself.

The Extras DVD also contained plenty of extras (ha), including deleted scenes, outtakes (there were plenty of those unsurprisingly) and interviews with the award-winning cast, and there were also some script books released. In more recent years Gervais has gone on to further success in various films. It does make me realise though that I am not following him on Twitter, if it had been around in 2002 I would’ve done so in a flash, but he seems to spend a lot of time ranting on there when he isn’t laughing in interviews.

One thought on “The Comedy Vault – Extras.”