It’s about time for another soap review. When Neighbours came to the UK, after a slow start, it achieved large ratings that any primetime show would’ve been satisfied with. So after this success British TV channels were very eager to import any Australian soaps to fill the daytime schedule, and by the late-80s they seemed there were lots of them being shown. This is one that I don’t remember from the time, but I have been interested in finding out more, and I managed to track down some episodes on YouTube.

Richmond Hill seemed to have a lot going for it. The show was created by Reg Watson, who was also behind Neighbours which was at the peak of its populartity in the late-80s, and unsurprisingly it was sold as “if you like Neighbours… you’ll like this!”. It was shown in a primetime slot, and the episodes were about an hour long. You can probably guess what the fate of this one was. 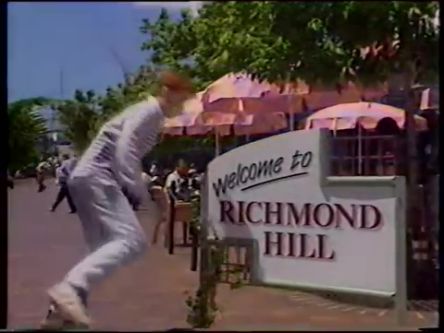 The show was set in a small fictional sunny town near Sydney. The various families played out their lives, accompanied by some cheesy incidental music. Also featuring prominently was a police station. Some actors who are already established in soap were among the cast, including former members of Prisoner: Cell Block H, Sons And Daughters, and the mighty The Young Doctors. When I was younger, I did think that there were only about 25 actors in Australia, because the same ones appeared in all the soaps.

There was also a younger generation of cast members featured, and one who went on to bigger things was Emily Symons, who played Anne Costello with a big late-80s hairstyle (in her TV debut). After this, she would join Home And Away, and she also appeared in British soap Emmerdale for many years, before returning to Summer Bay in the late-2000s.

Richmond Hill seemed to receive a very average response from viewers and critics, it wasn’t the most action-packed of soaps. There were 91 episodes, and it all ended rather abruptly in 1989, with no proper final episode to finish everything off. They didn’t even get the opportunity to randomly blow up the entire cast on a boat, which is what usually happens in faltering soaps. It was forgotten rather quickly, having totally failed to live up to the hype. Strewth.

Richmond Hill was shown in an afternoon slot on ITV in the late-80s. I don’t know if it was shown in every region though, but it was briefly shown on Thames. It didn’t make much of an impact with viewers though, and when Home And Away took off it soon vanished, not even gaining a cult following in this country. It was then repeated on a satellite channel in the early-90s, but it has barely been seen since, and there has been no DVD release. I’ll take a look back at some more soaps from Down Under soon.