On this blog I have done some pieces that compared the first and final series of popular long-running shows, where I looked at how they changed and eventually evolved into a successful format, or in some cases became past their best. I have wanted to do a comparison piece about Countdown, but of course this still hasn’t reached its final series (and will it ever?), as it is still going on Channel 4.

So instead it’ll be a review of an edition from the first series, but not the first edition which has been much repeated (and was the very first programme on Channel 4), but from one later on that was first shown on 14 December 1982. And it is a surprise to discover just how much the format has changed since then. There was a rather funky opening sequence, and the host of course was Richard Whiteley, who remained until 2005. 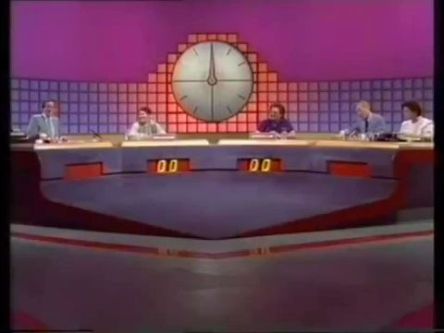 The first series was the shortest one there’s been, only being shown four days a week for under two months. There was the winner stays on format, but it didn’t conclude with a knockout competition. Instead, the two highest scorers in the series returned to play in the grand final. A notable thing about the set design (which lasted until 1989) is that the five-second intervals marked on the clock have now been added, they were absent from the very first editions (and the music which was also used until 1989 still doesn’t conclude with famous the extra “boo!” note).

Richard is very pleased to have received a letter from a viewer, which might be an indication that the show is beginning to grow a loyal fanbase. And there are plenty of terrible puns of course. In Dictionary Corner is Kenneth Williams, who was only the second celebrity to appear in the corner, the first being Ted Moult (who also appeared in the unaired pilot and Calendar Countdown series). Kenneth went on have a very long run in the corner, appearing in 39 consecutive shows (stretching into the second series), and he is welcomed by a very enthusiastic studio audience. 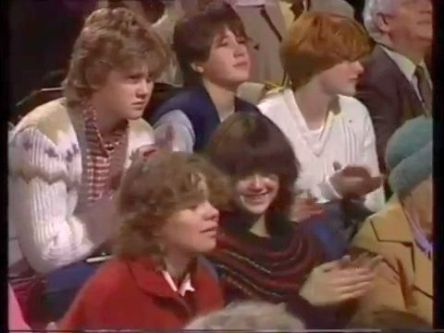 Kenneth is joined by a lexicographer, but it definitely isn’t Susie Dent, and they aren’t even namechecked in the credits. Richard also announces that the highest possible score on offer is 90 points, with ten points available in all nine rounds (I’m not sure when the 18 points for finding a nine-letter word rule was introduced). Another point is how many hostesses there are. One is Cathy Hytner who puts the letters (that are a horrible yellow on grey colour, and wouldn’t be changed to the more familiar while on blue for many years) on the board. You can tell that it’s the early-80s as Cathy seems to have turned up dressed as a member of Tight Fit.

When we get to the numbers round, there is another hostess who is Beverley Isherwood who selects the numbers and presses CECIL’s button (CECIL wasn’t given a high-tech makeover until 2013), although she doesn’t actually speak, it’s Richard who announces the target. Then we meet our third hostess on the show, the vital statistician 21-year-old Carol Vorderman. In the first series she alternated with another statistician (Linda Barrett), meaning that this series had no less than four female co-hosts, as if it was 3-2-1 or The Price Is Right.

It wasn’t until 1989 that Carol became the single co-host, and she eventually built up a enjoyable double-act with Richard, before leaving in 2008. Carol also writes the solution on a piece of paper that promptly falls off (the paper wasn’t replaced by a whiteboard for the co-host to write on until earlier this year). Carol doesn’t get it though and says “no I didn’t this time Richard, I’m afraid I was two out”, to which Richard replies “oh dear, you’ll have to do better next time, my dear”. It goes without saying that Richard and Carol’s interaction improved over the years.

Kenneth then goes into the break with an anecdote. Then, after the break, Richard still seems to be disappointed that the contestants didn’t correctly solve the numbers round, saying “it was his maths that let him down I’m afraid” which seems a little harsh. It’s by this point that Kenneth is still rambling on and Richard begins to look like he doesn’t know what he’s on about but laughs politely anyway. 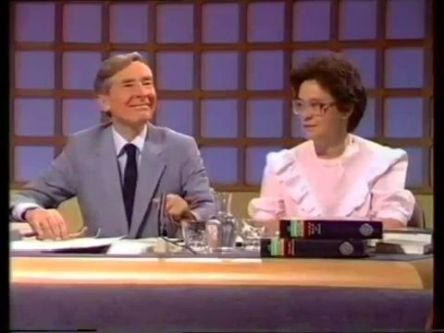 Carol does get the second numbers game though, what a relief. Then it’s the conundrum. At this time the nine-letter word was randomly scrambled, and was physically turned over by Cathy (when she remembered to do it, the clue actually appears with two seconds already on the clock). The game ends as a draw, and this means that there will be a replay tomorrow (it wasn’t until series 22 that ties were split with extra conundrums).

Another interesting thing is that this edition in a 30-minute slot runs for 26 minutes. It wasn’t until September 2001 that the show was extended to 45 minutes with extra rounds added, meaning that it has almost been running for longer in its extended version. The closing music also runs for longer than 30 seconds! Finally, Countdown was a Yorkshire Television Production for Channel 4 at the time, but it is now made in Salford.