A while ago I decided to take a look back on here at the Weathergens, the very impressive and creative characters who appeared in the idents that introduced the weather forecasts on ITV from 1996-2001. It has gone on to be one of my most popular pieces from the past year, so I have decided to do a sequel. This is a piece that will look at the predecessors to those, a series of idents that were used from 1993-1996 when the ITV National Weather was sponsored by Powergen. These were also very good, if not as great as the Weathergens, and they were all accompanied by a suitably stirring soundtrack. They all featured different types of weather happening against the Powergen symbol, and the one most appropriate to that day’s weather would precede the forecast. I’m fairly sure that there were 13 of these made (including a couple of minor variations), and I don’t think that any of them had an official title. In no particular order, here’s a brief description of all of them. 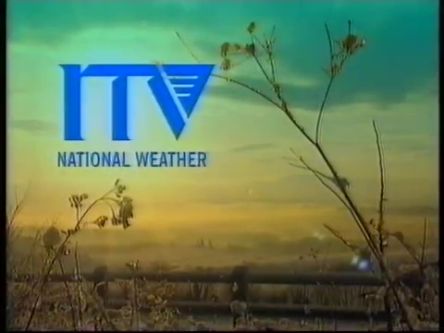 1. Some ice forms on the Powergen symbol, which is then rubbed away by a hand.

2. A dog looks on as all of its hair is ruffled by some light wind.

3. A duck flaps and slides around on some ice. It also seems to move in time to the music!

4. Some drips of rain slide down the Powergen symbol.

5. Spring has sprung as some flowers bloom, much to the approval of the woman in the Powergen symbol it seems.

6. A very hot and sunny day. This one also features the most sombre variation of the soundtrack, with makes it oddly all a little moving.

7. There is snow everywhere, which then falls down to reveal the Powergen symbol, accompanied by bells and birdsong.

8. A rather windy one, making everything flap everywhere (I think that there was a stormier variation of this one for when it was very windy).

9. Some heavy rain falls (again I think that there was a stormier variation of this one featuring some flashes of thunder) which concludes with a big drip landing in the water.

10. A cold one featuring someone who is wearing a big coat but is still shivering, before vanishing into the air.

11. Some light rain falls on a few leaves.

12. It begins to get light, revealing some shadows under the Powergen symbol.

13. A rather misty one that features some flickering and buzzing neon lights.

Another thing that I liked about this era was when the forecast ended, there was a still of part of the opening ident down the right side of the screen during the summary, which reminded me a little of the slide designs that were used on BBC2 from 1991-1992 (another great piece of TV presentation from the 90s). There were also edited versions of the idents shown occasionally, cut down from the usual length of about 15 seconds. 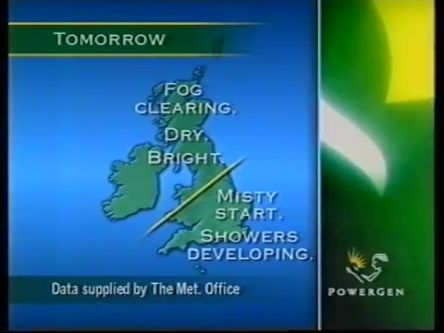 I’ll conclude this piece with a picture of weather forecasting giant and hero to millions Martyn Davies doing his thing. Bye for now.