It’s time for another review in my “where there any decent 90s ITV sitcoms?” series, and this is one that caused something of a stir, but not necessarily for the right reasons, so I watched a couple of episodes on YouTube recently to remind myself all about it. Holding The Baby starred Nick Hancock, who had already appeared in a few comedy shows including sitcom Me, You And Him (that I reviewed a while back), but five years on from that he was now a much more well-known name thanks to his presenting of shows They Think It’s All Over and Room 101, along with his series of football gaffes released on VHS.

Holding The Baby starred Hancock as Gordon Muir, who one day finds his wife Kate with a much younger man, and picture this they were both caught making love on the front-room floor. Rather than saying “it wasn’t me” though, she promptly ran off with her new man, leaving Gordon to bring up their infant son Daniel on his own. He is a successful businessman, how could this happen to him? 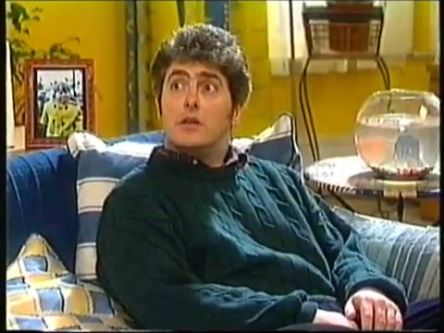 We join Gordon about a year on from this, by which point his brother Rob (Joe Duttine) has moved in, although he doesn’t exactly help out, and his friend Laura (a pre-Smack The Pony Sally Phillips) also causes problems, and he soon discovers that life as a single parent isn’t easy. The first series of Holding The Baby came and went with little fuss, it was when it returned to ITV for a second series in 1998 that it really ran into trouble. 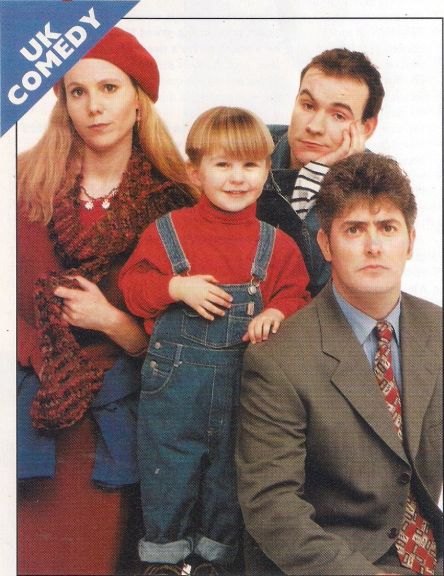 What have they let themselves in for…

Firstly, Hancock left the show and was replaced in the main role of Gordon by Hugh Bonneville (a different child played Daniel too), and there was also the introduction of Gordon’s new love interest Claire. Also, the ratings were rather indifferent, so ITV dropped the show just three episodes into the run, making the industry fear that they were going down the American route of taking failing shows off the air. However, it resurfaced three months later, but only two of the four remaining episodes were shown, and over 20 years later the two final episodes have never been shown on any TV channel.

It didn’t end there though, as there was also an American version of Holding The Baby which launched on Fox in 1998, but again it wasn’t much of a success, 13 episodes were made and only seven were shown. There has been no DVD release of Holding The Baby, but it does have a Wikipedia entry (although this just about consists of only “Holding The Baby is a UK sitcom series”). It seems that nowadays the show is only remembered for an early appearance by a pre-Doctor Who David Tennant in one episode.