Stephen Fry and Hugh Laurie are a double-act who appeared in various things throughout the 80s and 90s. Their TV work includes the acclaimed comedy sketch show A Bit Of Fry And Laurie, and also the sitcom Jeeves And Wooster. They also appeared in plenty of adverts including Alliance And Leicester, but wherever they turned up, they were always entertaining. And in the late-80s, they also featured in their own radio series.

Saturday Night Fry always began with the theme music, which definitely seem to become familiar as the theme music, and most sketches were introduced with a piece of classical music. Even at this early stage, their familiar style had been developed. Fry was the main host and writer, and there was a very impressive cast, he was he often accompanied by Laurie, but also contributing were Emma Thompson, Jim Broadbent, and Robert Bathurst. 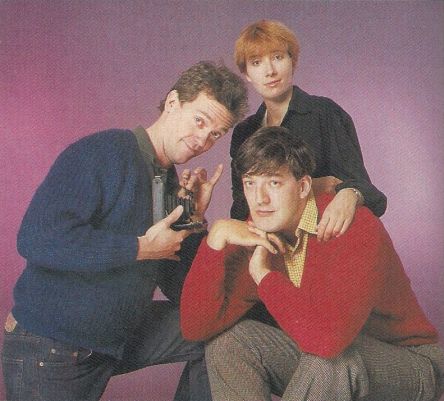 There were no regular characters as such, but there were plenty of memorable sketches. These included the script being arranged by the others when Stephen wasn’t looking, causing all sorts of chaos, Stephen travelling around the country on a bike with his wobbly belly, and also Stephen Will Do His Level Best To Comply With Your Wishes, where listeners wrote in hoping that their dreams would come true, but it often doesn’t happen.

And there was also a chance to learn how to speak Strom, a rather bizarre made-up language, this was one of the highlights, how did they think of these things. The show was also rather fond of featuring some unusual names, but it’s always good to hear from the likes of Suckmaster Burstingfoam. One episode featured a rather enjoyable guest appearance from Barry Cryer (“at my age it’s a miracle!”).

Saturday Night Fry contained a lot of the clever wordplay that Fry and Laurie would become known for, and if I can make a bad attempt to mimic some of this myself, I would have to say that a lot of the sketches were very cuddly and the show overall was thoroughly lovely. There was only one series, but we did go on to get four series of A Bit Of Fry And Laurie, which continued in a similar style. About a decade later, there was another radio series with the same title, but this wasn’t a comedy.