Not so long ago I reviewed TV Offal, and this another show that was created by the Evening Standard‘s TV critic of the time Victor Lewis-Smith, featuring some more of his scathing analysis and bad taste jokes, but this was a series that concentrated on the history of TV adverts. Once again, Victor didn’t appear in-vision (but did appear in animated form) and offered his views in voiceover.

Now I’m sure that you have noticed by now that I am rather interested in adverts (and shows about adverts), so this is definitely one that was worth a watch. Ads Infinitum started out as a one-off, before going on to get two series rather late at night on BBC2, and all of the editions were only ten minutes long. The archive was raided to share some TV adverts that hadn’t stood the test of time, or were just plain ridiculous. Victor watched sat in his chair, and he often had to rewind some of the adverts and show them again, because he couldn’t believe what he’d just seen.

It wasn’t just adverts that were featured though. The idea was expanded to also have a look at cinema adverts, infomercials, public information films, and even shopping channels. There were plenty of observations, such as wondering if whoever thought of the name Vimto for a fizzy drink ever realised that it was an anagram of “Vomit”, and there was yet another outing for the terrible Brush-O-Matic, that also appeared on the 100 Greatest TV Adverts show.

He still hasn’t got that suit clean.

Although most of the clips featured were from the 70s, I did enjoy the edition that looked back at the advertising of children’s comics and their bizarre free gifts over the years, because it contained an advert for the launch of The Beezer And Topper after they had merged in 1990. I do remember that, and I used to be a regular reader myself, I didn’t expect a reference to feature here. 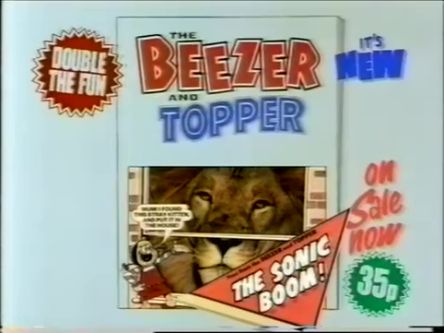 Also featuring were cinema adverts on mouldy old film, where you could visit restaurants “only a 50 yard walk from this cinema”, creepy PIFs with advice on how to survive disasters, and the show also helped to make famous the “holidays abroad? Never again. Third time we’ve been, third time we’ve had tummy trouble” advert for diarrhoea relief. And there was even a spoof Ceefax page thrown in too, what more could you want.

It’s fair to say that nobody else really makes TV shows like this, Ads Infinitum was another rather bizarre idea that definitely made you take notice. Goodness knows where they found half of this stuff from, and based on the opening sequence, it seems to suggest that having to watch endless adverts to put this show together made Victor have nightmares about Tony The Tiger for a long time after.