Bullseye is a fondly thought of long-running game show that was on ITV for 14 years. After it ended in 1995, it was often rumoured that it would return to the screen. In 2005 as part of the 50th anniversary celebrations of ITV there was a special series called the Game Show Marathon, where each week a classic game show was revived for a one-off edition with celebrities as the contestants.

These included the likes of Blockbusters, and also Bullseye, making it the first new edition for a decade. This was rather well received, so maybe it was finally time for a full series of a revival. And in 2006, game show channel Challenge decided to bring it back! Well, it was what we wanted wasn’t it? This was back in the days when Challenge made some original programming along with showing repeats. Dare I go near this one, as it seems that most fans would rather forget that it happened?

Well firstly, Jim Bowen wasn’t invited back to host. Instead, Dave Spikey hosted the revival. He was best known at the time for appearing in Channel 4 sitcom Phoenix Nights, and he did have some experience in game show presenting, as he was one of the hosts of ITV’s Chain Letters. However, they did bring back scorer Tony Green to join in. I remember one critic saying at the time something like “they brought back Tony Green but not Jim Bowen, the mind boggles”.

The revival begins with the opening sequence which is a reworking of the famous one that was used around the late-80s/early-90s, along with a different version of the theme music that everyone claps along to. It all seems a little cheap compared to the ITV version, although that could be said about just about all the elements of the show. As ever, three teams of two take part to show off their darts skills and general knowledge. 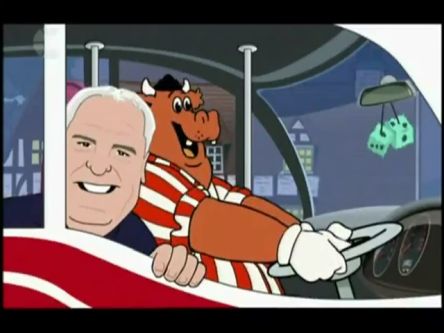 Now we were in the era of big money game shows, it is something of a surprise to discover that the money on offer actually went down in this version, with £150 for hitting a bullseye in the first round instead of £200. All other money values stayed the same. This was followed by the Pounds For Points round, although usually the round’s highest score was around 41, there weren’t many 180s on display here.

At the end of this round, the lowest-scoring teams were eliminated, but don’t worry, they did get their bendy Bullys along with plenty of other consolation prizes. After the break, it was time for the charity throw, but just like in some of the early series of the original version, the shows alternated between a professional darts player such as Phil Taylor and a celebrity taking part.

Then it was time for Bully’s Prize Board. There were nine prizes on offer as ever, but some of them seemed to get laughs from the studio audience which was a little harsh, the prizes weren’t that bad were they. Then it was time for the gamble, to score 101 or more in six darts to win the star prize, maybe it could be a fancy new car, just as long as it’s not another speedboat!

The revival of Bullseye lasted for 30 editions in one series, although it is still repeated on Challenge all these years later, but usually at around 2am, and there have been no plans for another revival. This version wasn’t as popular as the original series and overall it was a little disappointing, the format was 25-years-old by this point, maybe its moment had passed, but if ITV had given it a go and it had a bigger budget it possibly could have done a lot better. Maybe that could still happen one day.