It’s about time for another look back at a Saturday Morning show. Motormouth, which replaced the long-running No. 73 as CITV’s main Saturday Morning show, was a memorable show which featured various changes to the format over the years. There were several presenters, with good old Neil Buchanan being the only one to host for the whole run of the show. It was another show that had the usual features such as showing cartoons including The Real Ghostbusters and all the hottest pop groups of the time being interviewed in the studio, along with a few other enjoyable things.

In the first series, as well as Saturdays, Motormouth was also shown on Sundays. There was a big inflatable mouth in the studio too. There was also a comedy spin-off called, er, Spin-Off. This was a parody of soap operas that was supposedly set behind the scenes of the show and featured some familiar faces including Richard “Cuthbert Lilly” Waites, Wendy “Wizadora I“, Van Der Plank, Joe “Spatz” Greco, and Roger Sloman, who has been in lots of things, including recently appearing in EastEnders, playing the crazy characters.

By the second series new presenters Gaby Roslin (long before The Big Breakfast) and Steve Johnson joined the show. He was memorable because he hosted the games on the show in a rather crazy style. These included It’s Torture! and Gunge ‘Em In The Dungeon. In later series these were replaced by Mouse Trap, a version of the famous board game, which featured an enormous green flipping over man thing and everything, and there were lots of great prizes on offer for contestants.

In the third series Andy Crane, having recently left the CBBC broom cupboard, joined the presenters line-up, and the format changed again to now look like it was coming from a diner. I do remember there being a regular competition around this time where viewers could write in and win a can which said “Steve’s Brain” on it which was all rather odd. 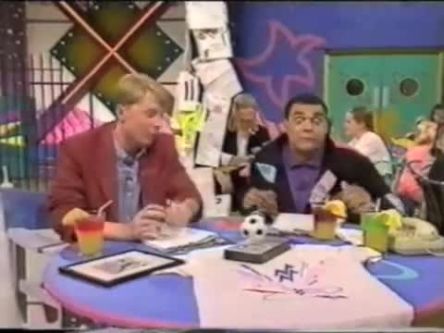 In the final series there was another spin-off feature which this time was a look behind the scenes, which seemed to take up a lot of the show. Every week the production staff interacted with the various guests who would be appearing on the show, and there were also various plotlines. The cast members included Carla “Sophie II” Mendonca and Siobhan “Benidorm” Finneran. Wow, it was so crazy. Also in this series Neil hosted a celebrity edition of Finders Keepers, with various stars raiding the rooms.

Motormouth ran for four series and was produced by TVS. Although it was a show that I did enjoy watching it doesn’t seem to have lingered in the memory with many viewers as long as its rival Going Live! which was shown on CBBC at the same time, although it had good ratings. This is unfortunate as it definitely had some great moments and there are lots of clips available to watch online, including just about the whole of the final series.