This is someone who had a rather varied career in TV. Jeremy Beadle might be remembered now by most people as a prankster, but I was always more interested in his game show work. He started out in radio as a host on LBC, and he was also working behind the scenes on various shows, including devising formats and compiling questions.

He first really became known in the early-80s for being one of the hosts of ITV’s Game For A Laugh, and this led to other successful shows including Beadle’s About and People Do The Funniest Things. But the first game show that I really remember him on was Chain Letters, this was the long-running word game, although he only hosted the first series.

This one had the honour (?) of being the first to feature in ITV’s 9:25am game show slot, which ran for about a decade. Going into the late-80s, he hosted a few more game shows, including Born Lucky, and It’s Beadle, although I don’t remember watching either of them, and it could be argued that some people weren’t hugely fond of his shows. But in the early-90s, one of the most popular shows of his career launched.

You’ve Been Framed! really began the craze for shows featuring “home video howlers”, as they were always described in TV magazines. Although this wasn’t a game show as such, in the early series the studio audience would vote for what they thought was the funniest clip of the show, which would win a cash prize, leading to a grand final, where the overall winner won a bigger cash prize.

I remember that in the mid-90s he returned to the radio for a late-night show, and I stayed up past my bedtime to listen to his thoughts on quirky subjects. By the late-90s though, he had left You’ve Been Framed!, his other shows including Beadle’s About and Beadle’s Hot Shots had ended on ITV, and he wasn’t seen on TV so regularly after this.

His next show was Channel 5’s Win Beadle’s Money, where contestants had to beat him to win a cash prize supposedly from himself. As he was something of a trivia buff, this wouldn’t as easy as people might’ve first thought, and there was usually a close final. In the early-2000s, he took part in Banged Up With Beadle, which featured in the first series of Saturday Night Takeaway.

He had been locked away, every week someone would join him, and they would live together and have to learn a task which they had to perform on the live show to win a prize. It was a shame that he never really got the opportunity to launch the next stage in his career, some think that he could’ve gone on to host various documentaries where he could show off his knowledge and enthusiasm.

I was thinking recently about TV anniversaries. I know some people might find them rather meaningless, but I wondered if any game shows I enjoyed launched in August 1994, 1999, 2004 or anything like that. And then I realised that this month is the 20th anniversary of the launch of Channel 5’s game show Win Beadle’s Money. I know that this was based on an American format, so I thought that I would review that to continue my series of looking at the original American versions of game shows that later came to the UK, and there are plenty of editions of this one on YouTube.

Win Ben Stein’s Money (Ben Stein being an awfully clever chap who has an interest in politics and practically everything else) launched on Comedy Central in 1997. The gameplay was just about the same, although the biggest difference was that there was $5,000 on the line (as opposed to the £1,000 with Jeremy Beadle). Three contestants took part in the hope that they could beat Ben at his own game. One thing’s for sure, it’s not going to be as easy as it looks. Keep watching and you might learn something. 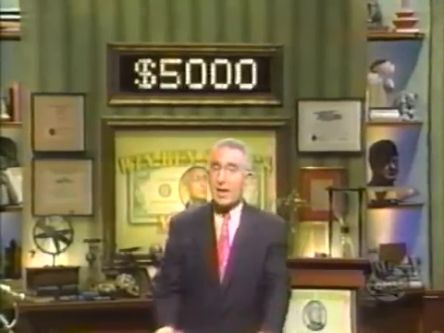 The other main host for the early series was Jimmy Kimmel (in the UK version it was Richard Morton). In the first round there were five categories concealing questions with a value between $50 and $150. The questions are asked by Ben himself at this stage. Getting the right answer takes the money out of the prize fund, and then a supplementary question is asked for a further $50. All the questions appeared on a screen, but try to remember that you are not on Jeopardy!

The lowest-scoring contestant is eliminated, and any money they had is put back into the fund. In round two, Ben takes the eliminated contestant’s place, and Jimmy now asks the questions. Ben has no advance knowledge of what they are, honest. Questions are now worth between $200 and $500. If Ben gets it right, he doesn’t score anything, he simply stops the others from taking more out of the fund. There are no supplementary questions here. Again, the eliminated contestant’s money returns to the fund.

The winner keeps their money, and can now play for the full $5,000, deciding if they want to go first or second in the final. They both go into isolation booths so they can’t hear each other. The finalist’s booth was rather tatty, while Ben’s was very lavish. The finalist and Ben are individually asked the same ten fairly difficult general knowledge questions in 60 seconds. Wins didn’t happen very often though (make the inevitable “Ben should be a Chaser” comment here).

If the contestant did beat Ben though, they won $5,000. A draw meant that they won their money plus an extra $1,000. A defeat meant they only won the money they already had, and Ben keeps his lofty reputation. There were also special editions were winners could play again for $25,000. There were over 600 editions made of Win Ben Stein’s Money (a lot more than the UK version), it won plenty of awards, and it did come across as very entertaining and quirky.

An entertaining game show shown on Channel 5 in the 1990s? Yes, such a thing exists. Contestants compete against none other than Jeremy Beadle to win money, but not just any old money, the money personally out of Jeremy’s very own pocket! Yes, it really happened. Jeremy was actually a big trivia buff and very interested in quizzes, both in devising them and playing them, so beating him would be harder than it first seemed. Will anyone have what it takes to beat Jeremy at his own game? 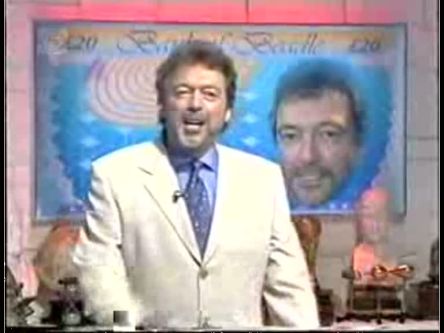 The show begins with three contestants taking part. There are some categories on the board which are revealed by co-host Richard Morton, who somehow still had a job after hosting the rotten Move On Up. After the category is picked, the amount of money on offer is revealed. Jeremy then asks the question, and whoever gets it right can then answer a bonus question.

At the end of this round, the lowest scorer is eliminated and the money that they won is put bank into the bank. In round two, Jeremy replaces the eliminated contestant, so Richard now takes over asking the questions. Jeremy insists at this point that he has no idea what the questions are in advance. There are more questions on the buzzer for various cash values. If Jeremy buzzes in and gets a question right, he doesn’t win anything, he just stops his opponents from making any more money. Again at the end of the round the lowest scorer is eliminated and the money goes back into the bank.

The remaining contestant then goes into the head-to-head final. They and Jeremy are individually asked the same ten fairly tough general knowledge questions in isolation booths with one minute on the clock, with the contestant going first. They then have to watch on to discover how Jeremy does and there were some very interesting finishes. 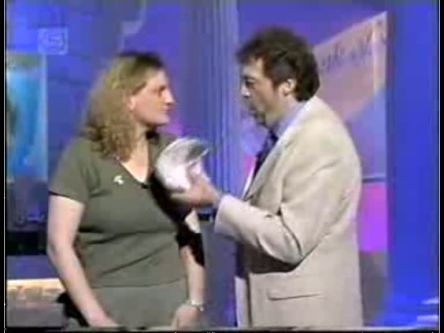 If the contestant is beaten by Jeremy, they only take away the money that they had already won. If it ends in a tie, they take their money plus another £200. But if they manage to defeat Jeremy they win the star prize of £1,000 from right out of Jeremy’s very own pocket. Beating him didn’t happen very often though and he only lost eight times in the 52 shows that were made. Can nobody beat this brainbox?

Win Beadle’s Money was based on an American format and was definitely one of the better Channel 5 game shows. Jeremy was always entertaining and the game although competitive was always played in a good spirit, with the final always being intriguingly unpredictable, although unfortunately Jeremy wasn’t seen much on TV any more after the show ended. I’m fairly sure it hasn’t been repeated in more recent years, Channel 5 scattered the show around the schedule somewhat, and the Wikipedia entry is far from comprehensive, but it was a good attempt at a twist on the regular game show format.