1984: The Technos released “Nightime Heaven”, a great Synthpop song that reached no. 97 in March. They also released the single “The Spirit Of The Thing”. Also, Steve was involved in the making of the board game Hype, which was about “all the slime and grime of the music business”. Can you form a band, and take them from playing pubs to getting a record deal, making a single, and topping the chart? Hype came with a free 12″ single of The Technos’ theme for the game, but I don’t know if you had to play it while you were playing the game though.

1985: The Technos released the album “Foreign Land”. A remix of “Falling In Love Again” was released as a single, an update which showed just how much pop music had changed in the few years since it was originally a hit. “Foreign Land” was also re-released as a single, and it had some success on the US Hot Dance Club Play Chart. I’m not sure what genre you could class their music as (Gospel Synthpop? Techno Swing?) but I have enjoyed a lot of their songs.

1986: Steve’s career took an unlikely swerve when he starred in the children’s TV show The Kid. This was a sketch show that contained no dialogue, and 13 five-minute long episodes were made. I wonder if it was an influence on the similar and much more successful “a comic coming to life” show Zzzap! that launched on CITV in 1993. I must say that Steve didn’t come across as the first person who would be a zany children’s TV personality, but his performance (and the distinctive red streak in his hair) along with the rest of the cast was very enjoyable. The Kid was co-created, co-written, and co-directed by David G Rose, who directed the “Falling In Love Again” video, and he also directed Danielle Dax’s 1985 concert that was shown on ITV and released on DVD, and her 1987 video for “Big Hollow Man”. How about that.

1987: In March The Kid was shown on CBBC for the first time, as part of the afternoon strand The Album, which earned Steve a few namechecks in Radio Times. The Kid was also shown on The Children’s Channel in the early days of satellite TV. Steve appeared on that channel to promote The Kid, which was shown as part of the Roustabout strand with Mick Robertson, best known for hosting ITV’s Magpie. Steve promised viewers that there would be “very silly noises”.

Also, rather curiously, some footage that wasn’t shown on TV from the interview is online, mostly consisting of Steve and Mick staring into space waiting for their cue as someone fiddled with a clapperboard. In June Steve and Bev were interviewed in the American magazine Billboard, where their music was described as “they aren’t your average anything“.

1988: The final The Technos album (and Steve’s eighth and final album 13 years on from his first) “Songs For A Nervous World” was released. The Kid was also repeated on BBC1 in the summer, this time in a Saturday Morning slot, but I’m fairly sure that it hasn’t been shown on TV since, and there’s been no DVD release. After this, Steve turned away from making music, although he remained a keen supporter of Greenbelt (a Christian music festival that he first performed at in 1974), because, put it this way, he wasn’t an atheist. Steve now focused on his painting and lecturing work.

post-1988: Steve died suddenly in February 1993, the day after his 42nd birthday. Hundreds attended his funeral, and his obituary was published in The Independent. It seems that he was a popular and influential figure in the music business, Simon Mayo said that he was “one cool dude”. It was rather odd to discover his work and realise that it has been over 25 years since he has gone, but it really was a fascinating career that deserves to be better known. There is also a comprehensive website about his work that preserves his legacy. But the story doesn’t end there, and it now takes a very bizarre twist…

In April 2016, 23 years on from his death, there was “This Is Not A Rehearsal”, a celebratory retrospective of the artwork of Steve. This was held at a gallery in east London, which is very close to where I live! Among those who attended was Bev Sage (who, remember, is “Queen Of The Rapping Scene”) who has had a lot of success as an artist herself. So that’s the most high-profile celebration and reappraisal of his life and career since his funeral. And it happened less than half a mile from where I live. It was very odd to discover all this. Why here of all places? Why do these coincidences happen so often? Either way, it was good to know lots of people still think fondly of him.

Recently I reviewed the 80s children’s TV show The Kid. I don’t remember watching the show at the time, but I found it online one day and enjoyed it. The Kid starred Steve Fairnie. Now this was someone that I knew nothing about, but he must have come from somewhere. Had he appeared in any other TV shows? I did some research, and I discovered that he had a rather remarkable career in music along with various other things. I thought that it was all interesting enough to do a piece about.

I know that it won’t be 100% comprehensive, but I have picked out some of the highlights and will concentrate on Steve’s music releases and TV appearances. My only motivation for doing this is because I’m always keen to discover more about 80s pop music and it’s a story worth telling. Words that are often used to describe Steve’s personality include “one-off” and “unique”, many think he should’ve had much more success, and hopefully it’ll become clear why. This piece will concentrate on 1979-1988 and be in two parts, although it also features a little of what happened before and after, along with a remarkably odd twist at the end that is worth hanging around for. Off we go then…

pre-1979: Steve Fairnie was born in February 1951 in Fraserburgh, Scotland, although his family moved to England shortly after. By the early-70s he had taken an interest in art and formed the band Fish Co. with Steve Rowles. In 1975 they released their first album “Can’t Be Bad”. In December 1977 Steve married Bev Sage who would be a major influence on his work for the rest of his life, and they had two children. The second and final Fish Co. album “Beneath The Laughter” was released in 1978.

1979: By this point Steve and Bev had formed a band called Wrïtz, and released the album “Wrïtz”. Although I couldn’t find any features in music magazines from the time, they did have a couple of adverts promoting their album and tour in NME. They also made some TV appearances, including in December the BBC1 show RPM that I think was only shown in the West region. They performed “Night Nurse” which had a routine where Steve’s hand fell off, along with “Luxury” and “Movies”.

It was very exciting seeing their performance on the brink of a new decade, although people didn’t know it yet the first half of the 80s was going to be a very creative time for British pop music, and Steve would be a part of it. They also performed “Movies”, “Night Nurse”, and “Private Lives” on a TV show in Ireland. “Night Nurse” was released as a single, and it was produced by Godley And Creme, a duo who would go on to direct many pioneering music videos in the 80s, including “Cry” that was shown on The ITV Chart Show‘s Video Vault seemingly every other week for a while. 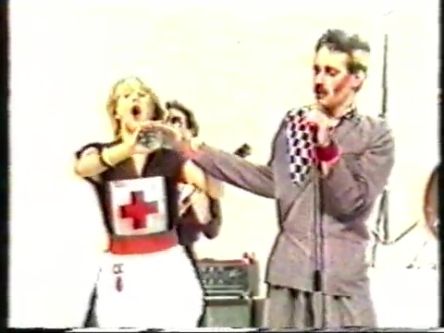 1980: Wrïtz had now changed their name to Famous Names (maybe a little tongue-in-cheek as they still weren’t that famous at this point). In August they played the Reading Festival. In November they appeared in the ITV drama Cream In My Coffee, starring Lionel Jeffries and Dame Peggy Ashcroft, where they performed “Movies”. They released the singles “Holiday Romance” and “Modern Mums”.

Famous Names also appeared on a TV show hosted by Steve Wright who had recently joined BBC Radio 1 (although I’m unsure if it was an unaired pilot or not). Steve was interviewed, and they performed “Holiday Romance”, “Luxury”, and “Muscle Culture”. They were also supported on tour by Shock, a dance troupe whose members included Tik And Tok and blue-haired fishnet stocking-wearing vampire robot Barbie Wilde.

1981: Steve and Bev became a duo called Techno Twins. I don’t know if it’s right or not, but it has been said that they were the first people to use the word “Techno” in the context of a musical genre. So maybe we have them directly to blame for “No Limit” by 2 Unlimited over a decade later. They also had a side project called Techno Orchestra, and released the album “Casual Tease” under that name. The Techno Twins album “Venetian Blind” was unreleased. 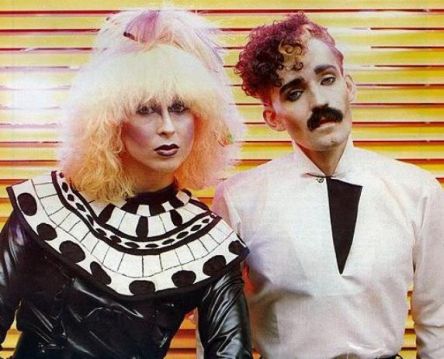 1982: The early part of this year was rather eventual for Techno Twins. In January they had their first and only UK hit single when their cover of “Falling In Love Again” reached no. 70, and there was a video made which featured Tik (or was it Tok). They also released the album “Technostagia”, which included a rather unique take on “I Got You Babe”. It was reviewed in Smash Hits, where it was described as “blippy” and scored, er, 4½/10. Also released as singles were “Can’t Help Falling In Love” (described by NME as “beautifully evocative”) and “Swing Together”. 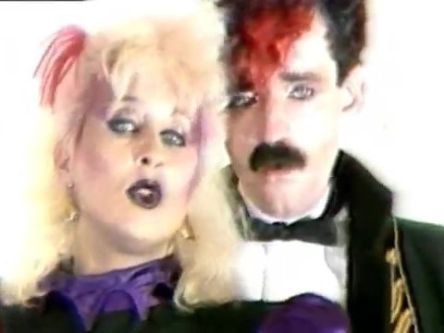 But it gets even better. Also in January, Bev (who had picked up a French accent along the way) was the guest vocalist on “Queen Of The Rapping Scene (Nothing Ever Goes The Way You Plan)”, a hit single for Modern Romance (best remembered for hits including “Ay Ay Ay Ay Moosey” and “Everybody Salsa”). This reached no. 37, and led to some TV appearances, including Dutch music show TopPop (where Bev had blue hair!!), and in February, Top Of The Pops! So one of them did get to appear on the show. I hope Steve wasn’t jealous. 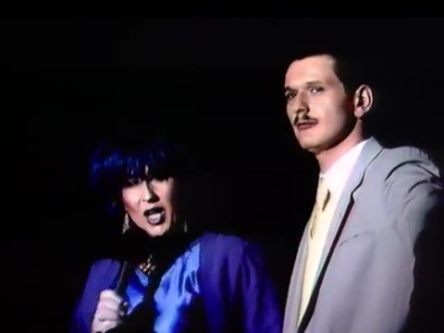 After leaving Modern Romance, frontman Geoff Deane went on to write for TV shows, including late-90s flop ITV sitcom Babes In The Wood. We remain eternally thankful. Also in February, they appeared on CITV’s Razzmatazz, where according to TV Times “the new electric band Techno Twins brighten up the studio with their latest single”. Bev also appeared in the video to “Big Boys Don’t Cry” by Nick Battle alongside none other than Barbie Wilde!

1983: Techno Twins had now renamed themselves The Technos, and in September there this was piece of news in Smash Hits: “Steve Fairnie of The Technos is wandering around hypnotising chickens. At least it might stop them making records”. Oof! Steve really did hypnotise chickens as part of his stage act. Crowds were reported to be “bewildered”. They released the single “Foreign Land” and contributed to the compilation album “Curious Collection”. Steve and Bev also appeared in the videos for “Blue Skies” by The Jets (not to be confused with The Jets who had a hit with “Crush On You”, they came later), and “Voulez Vous Danser” by Ricchi E Poveri which was a hit across Europe (where Steve did his award-winning Charlie Chaplin impersonation).

Don’t touch that dial, we’ll be back with more in part two…