A while ago I reviewed The Sunday Show, one of BBC2’s attempts to produce some edgy comedy but in an unlikely afternoon slot. One of the most memorable features was with Dennis Pennis, a character played by Paul Kaye (with an American accent) who asked famous people the questions that nobody else dared to, and had something of an attitude. After a while he became popular enough with viewers to host a spin-off show of his own. I did find a small amount on a tape once, but as some full editions have now appeared on YouTube, I might as well do a review.

Pennis Pops Out (a title that isn’t easy to search for online) was shown late at night at the weekend on ITV (maybe only in the LWT region? Hopefully someone can confirm this). This was a show all about music, but not really the kind you’d find on Top Of The Pops, being closer in style to the likes of Later… With Jools Holland or The White Room. Every week, Pennis, who had a distinctive look including his red hair, glasses, and suit covered in badges, would introduce various bands. There was also an amusing opening sequence featuring Pennis playing the guitar.

This show was made in 1995, which could be considered by some to be the peak of Britpop, and among the bands that performed live were The Lightning Seeds, The Charlatans, and Teenage Fanclub. Pennis would also do various sketches, and interview band members, all accompanied by a rather lively crowd. Who needs to go to a music festival when you’ve got this. If you were rather trendy and read Melody Maker in those days, I’m sure you would’ve loved it. 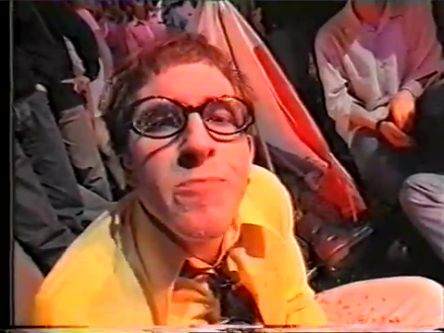 There was even a phone-in competition to win a goodie bag if you could answer a rather easy question. I didn’t realise that such things were around on TV as early as that. I also spotted some interesting names in the credits. One of the researchers was Brendan “Steve’s brother” Coogan, and one of the executive producers was Danielle Lux, which made me do a double-take. 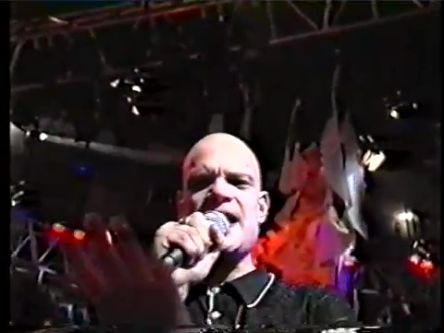 There was only one series of Pennis Pops Out, and he did indeed go on to host an edition of Top Of The Pops in September 1996. Not long after this though, Kaye ditched the character, because he was becoming increasingly well-known and celebrities were soon trying to avoid his outrageous questions, he was a victim of his own success I suppose. 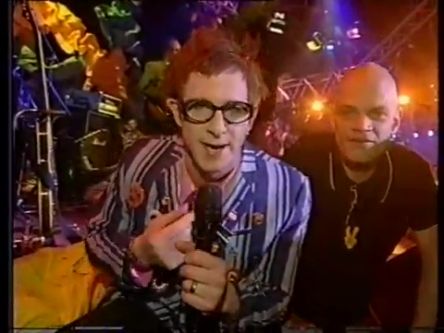 Kaye did move on to further things though, including sitcom Perfect World, comedy game show Liar, and several drama series. Unfortunately though, Kaye never took the opportunity to team up with fellow comedians Peter Kay and Phil Kay for a fast-paced zany comedy sketch show that they could’ve obviously called… The Paul, Peter and Phil Show. Well I’m awfully sorry for that joke, I’ll go and sit on the naughty step for a while.

Something rather unusual happened on BBC2 in the mid-90s. As well as the slot for alternative comedy, which was usually weekdays at 9pm (where several classics including The Day Today and The Fast Show were shown), there was also a slot on Sunday afternoons, between the end of many hours of CBBC, and the start of Sunday Grandstand.

As well as including repeats of Fantasy Football League and Shooting Stars, there were also some new shows tried out in this slot including This Morning With Richard Not Judy (that I also plan to review soon), and this one. The Sunday Show was live and usually 45 minutes long, and it was definitely much livelier that what other channels were offering at the time of the week. 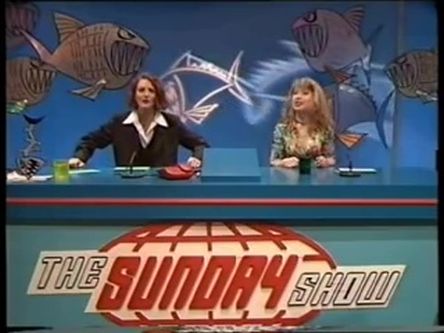 The hosts of the first and second series were Donna McPhail and Katie Puckrik (who had previously hosted The Word). The opening sequence consisted of a shark going round in a fishbowl, which looked suspiciously similar to the one used by BBC2’s Working Lunch. The Sunday Show was a mix of comedy and features, including a look back at some of the more unusual news stories of the week, plus what celebrities had been up to, and reviews of pop music, soaps, and so on.

One of the more memorable moments on the show was Dennis Pennis, someone who had a rather unconventional interviewing style that wrongfooted many a celebrity. After a while, he became popular enough to get some spin-off shows, including Pennis Pops Out, shown rather late at night on ITV and mostly being a showcase for the latest Britpop bands to perform their songs, and Very Important Pennis, looking back at some of his outrageous highlights.

The later series were hosted by Paul Tonkinson (who would go on to host one of the hundreds of relaunches of The Big Breakfast in 2001), and Jenny Ross. For the last series, comedy was provided by Peter Kay, presenting his “World Of Entertainment” in some of his earliest TV appearances, where he looked back at some strange TV moments. Even then he had perfected his “do you remember Bullseye?” routine, and it was clear that he was going to go on and be a big name.

There were also sketches with The Actor Kevin Eldon, and Bez from Happy Mondays took some time off from ‘avin it large in Ibiza to tell us all about the world of science with some zany experiments. There were four series of The Sunday Show (including a couple of Christmas specials), and it is best remembered now for launching some comedy talent and providing something that hadn’t previously been seen on TV at that time of the day.