It’s time for another cartoon review. This is another show whose history goes back over 50 years. A long time ago there was a series of successful comedy films called The Pink Panther, and this character was then taken and given its own show on American TV that launched in 1969. The opening sequence was live action apart from The Pink Panther who was shown along with various other characters going around in a car.

Every edition normally featured three stories. One would begin with The Pink Panther having a smoke which seems a little odd now, and they didn’t look much like they did in the actual cartoon. Every edition was also just about dialogue-free (apart from the occasional groan, I don’t think that there were any words), and The Pink Panther as far as I remember never actually spoke at all. This was all accompanied by the famous theme music, and some canned laughter too. 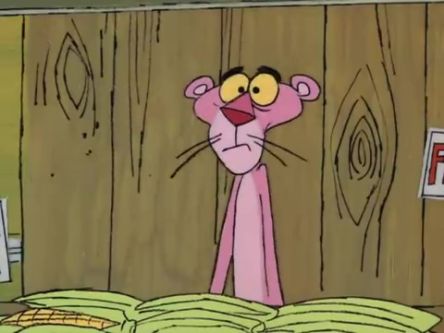 Every edition was also about six or seven minutes long, and every title contained the word “pink”. There were plenty of other characters who featured in their own stories too. These included Inspector Clouseau, who also appeared in the films. But the one that I remember most though was The Ant And The Aardvark. This was where a blue aardvark tried to eat a small red ant called Charlie.

He always failed though, but he constantly tried in a Wile E Coyote style, even though everyone knew that he was never going to succeed and he shouldn’t have been bothering really. Then we would have another story from The Pink Panther, who most of the time was rather easy-going, although one thing that would get them flustered was doing the old painting a pole the same time as someone else so they constantly had to go round and round routine.

There were 11 series of The Pink Panther, although the actual title changed rather regularly, and it even moved channels by the end of its run. Its basic idea remained the same though. This was another cartoon that I don’t think was ever shown on the main CBBC afternoon strand, instead it was in various slots. I remember watching on BBC1 on Sunday afternoons around the late-80s/early-90s, by which point most of the editions were about 20 years old.

The Pink Panther remained popular enough for there to be several repeat runs, and then there were some specials and a few revivals, and it seems that one of these was shown in the 90s on Channel 4. There were also plenty of computer games and VHS releases, as there always are with these type of shows. Our pink hero was also used in an advertising campaign for fibreglass for some reason.