This will probably be the final original American version of a game show that later came to the UK that I’ll review, but I might go on to consider reviewing some Irish and Australian versions too because I am just fascinated by the world of game shows and I really enjoy putting the pieces together (and I hope that you’ve found them an interesting read too).

There have been several versions of The Match Game going all the way back to the early-60s. There have also been several versions in the UK of Blankety Blank, and indeed there is another one planned to be shown at Christmas this year. I have decided to review the early-90s version. The host by this point was Ross Shafer, and you’ll be pleased to know that he did indeed have a funny-shaped microphone, or maybe it was just the way he walked.

Of course, there were also the six celebrity panellists. It was good seeing ventriloquist Ronn Lucas along with his friend Scorch The Dragon among them. He also had a show on ITV around this time (that I reviewed a while ago), and it seems that he was popular in America in the early-90s too. I presume that he’s still at it, although three decades on he’s probably gone a little mouldy around the edges, and I hesitate to think what Scorch looks like now too, ha.

Also taking part were the likes of that guy who was in the sitcom Out Of This World (also shown on ITV for a short while), along with cast members of daytime soaps like All My Children. Just like in the UK, The Match Game didn’t take itself too seriously, although the format by this time was a little different. Two contestants took part, including a defending champion.

The sextet are given a clue and they all have to fill in the blank, and write their answers on a piece of paper. Can the contestant get a match? There’s $50 for every one. Then there’s the Match-Up round. The contestant picks a celebrity. There are 30 seconds, and for every match they agree on, they win $50. Then it’s back to another round of the regular game.

Then there’s another Match-Up round, but this time there’s 45 seconds, and $100 for every correct answer. The highest scorer goes on to play the Supermatch Game, but nobody wins a chequebook and pen trophy. This round is about the same as the UK version, where the contestant has to guess one of the top three answers. If they get the top answer, they win $500. 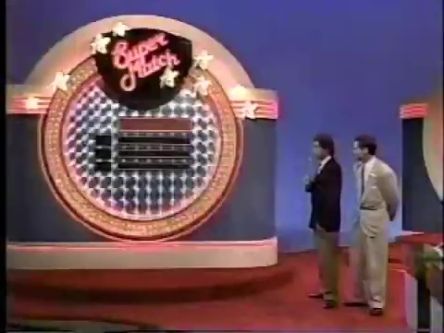 In the final, the amount they won in the Supermatch Game is multiplied by ten. They then spin a wheel to determine which celebrity will play with them in the final. If the wheel stops on a double (like in Name That Tune), they could win a maximum of $10,000, an amount that could never be dreamed of in the UK. The contestant has to simply match their answer with that celebrity to win the money, and they could play for five days before retiring undefeated. It was all rather enjoyable.