When I was younger, I did enjoy the work of Kenny Everett, his rather silly style has always been the type of thing that I have enjoyed in comedy. But I only really remember the last few years of his career, when he often appeared on the chat show and game show circuit (including hosting Brainstorm and Gibberish), along with his show on London radio station Capital Gold.

It wasn’t until later that I discovered his most successful TV work, when a clip was featured on the final show from Thames, a best-of was shown on Channel 4 in the mid-90s as part of a season that featured the best of Thames, there was also a repeat on Granada Plus, along with a few clips on TV Ark. I also heard some of his much acclaimed radio work for the first time when there was a compilation of some of his Capital Radio shows on BBC7. I thought they were inventive, clever, and best of all, very funny, and I was pleased that I enjoyed them as much as I hoped I would.

Cuddly Ken had already attempted to break into TV with a few comedy shows around the late-60s/early-70s, but about a decade later, and courtesy of Lord Thames, The Kenny Everett Video Show was the one that was the biggest success and won plenty of awards, and as the 25th anniversary of his death is approaching, I thought that it was time for a review to rediscover his great talent.

One important word in the show’s title is “Video”, because this made it sound very fresh and exciting, how many people had a video recorder when the show launched on ITV in 1978? Also rather surprisingly looking back, the first series was shown at 6:45 on Monday nights before Coronation Street. It was all written by Kenny, along with Ray Cameron and Barry Cryer. The show would become well-known for many things.

Firstly, it included a lot of the big musical acts from the time, including David Essex, Cliff Richard, Leo Sayer, and many more. And also, it featured a rather bizarre range of characters and sketches. There was no studio audience, it was all played out in front of the studio crew, who were encouraged to laugh, and even get their cameras into shot and everything, how daring. It really does look like the most marvellous fun to have worked on. There was also a lot of clever use of blue-screen technology, often making it seem that Kenny had been cloned several times over. This really was the master at work.

The most memorable characters who appeared in a white void and told us jokes included the rude biker Sid Snot (who also had a Top Ten hit single), Marcel Wave the womanising Frenchman, and Angry Of Mayfair. Sometimes the sketches were incomplete if there were too many outtakes, but if they were funny, they would be shown instead. And if all else failed, they got a laugh from throwing a bucket of water over Kenny. 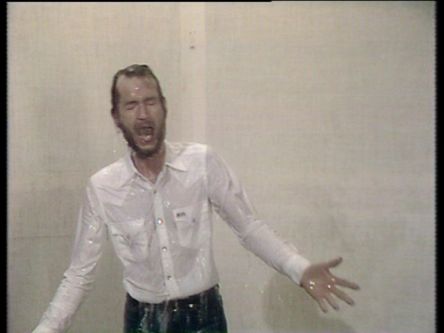 Among the highlights were Captain Kremmen, the spaceman who alongside his assistant Carla originally appeared in animated form, before appearing as real people in the fourth series, lots of bizarre adverts from around the world, and a rendition of the Thames Television theme from the renowned pianist Igor Blimey. Kenny’s unique take on The Bee Gees was rather great too. There was also Star Quiz, where celebrities including Michael Aspel, Lennie Bennett, and Terry Wogan had to answer an impossible question, or they would meet a horrible fate. And best of all, there was an appearance from Philip Elsmore.

And of course, there was Hot Gossip who did their dance routines that were very naughty indeed to the latest pop hits. There were 32 editions, including three New Year specials. The fourth series was renamed The Kenny Everett Video Cassette, moved to Thursdays, and shown at the same time as Top Of The Pops. After this, Kenny decided to leave Thames and join the BBC for a further five series in a similar style (that will be reviewed soon too).

There was also lots of merchandise, including a Captain Kremmen film, some annuals, and three compilations were released on VHS in the early-80s. Two more were released in 1989, that were then recycled and released on DVD in 2004 as Kenny Everett’s Naughty Bits. But people wanted more, and for a long time there was a hope that the show would be released in full. Then in 2018, Network finally released all four series on six discs to much delight. However, a small amount of the musical content isn’t featured, although it comes with a note saying “we tried our best, and we’re as disappointed as you are”. There are no extras either, but the fact that it exists at all is enough for some people.