This is the comedy sketch show that soon became very popular with viewers, so at some point, it was decided, why not go on a stage tour across the country. This might not be as simple as it first seemed though, because the large amount of characters were played by a not-as large amount of people, so there were always several costume changes taking place behind the scenes, the all the wigs had better be where they were supposed to be.

There have been a few The Fast Show tours over the years, and a show from this one was released on VHS in the late-90s, not long after the third series was on BBC2. The main cast took part, including Paul Whitehouse and Charlie Higson, and it was no surprise that a huge amount of people were eager to take the chance of seeing their favourite character doing their thing right in front of them, if you get what I mean.

So whether your favourites were the rude tailors, or maybe Ted and Ralph, everyone would be pleased, as they all featured. And this wasn’t just a case of “come on stage, do catchphrase, go off again”, as there was a lot of new material prepared, and all of this seemed to go down rather well, which was nice (well I had to do one of the catchphrases somewhere in this piece didn’t I).

The show was about 80 minutes long, and featured plenty of jokes, and it really does remind you just how popular this was for a while. Not long after this, The Fast Show went on tour again, this time along with the cast of Shooting Stars, which was another great comedy show that was on BBC2 around the same time, I imagine that was a lot of great fun to work on (and indeed watch).

A few years on from this, there was another stage tour, which was described as a farewell to The Fast Show, a statement which is always fraught with danger, because every time that the cast insist that they finally want to leave these characters behind and have no plans to do them again, they do always end up returning somewhere. And indeed, since this, they have appeared in adverts, spin-off sitcoms, and lots more.

The Fast Show was one of the most successful comedy sketch shows of its era, and so it deserved to be. Even though there wasn’t a huge amount of editions (three series and some specials), rather a lot more was squeezed out of the idea, with the popular characters also appearing in various adverts, on stage shows, in sitcom spin-offs, and so on. There was also a comedy panel game.

This was on Sky One, instead of the BBC, and I do remember this attracting my interest and seeing a little at the time. Jumpers For Goalposts (being one of The Fast Show‘s famous catchphrases) was all about sport, in a similar style to A Question Of Sport and They Think It’s All Over, that were also around at the time. This was presented by Simon “bid again, Simon” Day in character as Clive Gordon.

Two teams of three took part, and the team captains were Mark Williams in character as Scottish hardman Tommy Stein “Stein-Housmuir”), and Paul Whitehouse in character as Ron Manager (“Ron’s Rangers”, although these team names changed every week), who had a big rivalry, and also often wore some nice knitwear. Ron had a rather old-fashioned view on football. Do you remember the days when there were puddles on the pitch? Isn’t it? Now like now, no, marvellous.

Every week they would be joined by some panellists, including comedians, footballers, or anyone that they could get hold of cheap really, and this led to some rather unlikely combinations. So if you’d ever wanted to see Noel Gallagher and Paul Daniels, or Jim Bowen and Goldie, on the same team, then there was some good news for you.

There were various rounds, but none of them were particularly original, such as can you guess who this sportsperson is from these clues, and the fingers on buzzers, and although there was a score kept and a winning team announced, as always with these type of shows, it was the contribution that they made (such as how much they laughed at everything) that mattered the most. 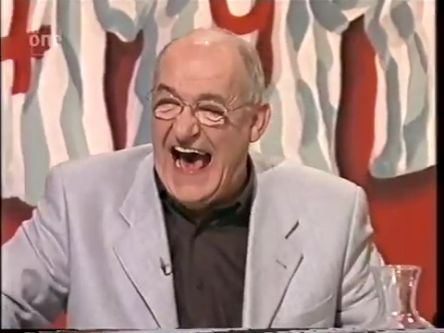 There were 13 editions of Jumpers For Goalposts in only one series, but this all came and went with little attention, and it could be said that this stretched the idea of the characters a little too far, maybe the genre was already too crowded. In later years there would be more sport-themed comedy panel games including A League Of Their Own and Play To The Whistle. But this one remains a curiosity from two decades ago. Ooh, mantle with aplomb, marvellous.

Paul Whitehouse and Charlie Higson had collaborated with Harry Enfield for many years on his various great comedy sketch shows, and when they went off to do one themselves it was easily as good as anything that Enfield created and The Fast Show went on to deservedly become one of the successful comedy shows of the 1990s.

The Fast Show (so called because, well, it was a show featuring fast-paced sketches) launched on BBC2 in 1994. I actually don’t remember seeing it the first time round but when I finally saw the first series in a repeat run about a year later I became a big fan right away. As well as Whitehouse and Higson there were lots of other great comic actors taking part. There were a huge amount of ideas and characters who featured over the series, and there were lots of memorable catchphrases. Of course because there were so many everyone will have their own individual favourites.

It is difficult to know where to being but among my personal favourites are Unlucky Alf who is endlessly getting into mishaps, the man who always says “anyone fancy a pint”, Arthur Atkinson the wartime comedian, the young man who thinks that everything’s “brilliant”, the strange foreign TV parody Chanel 9, and the man after creating an awkward social situation always said “I’ll get me coat”. 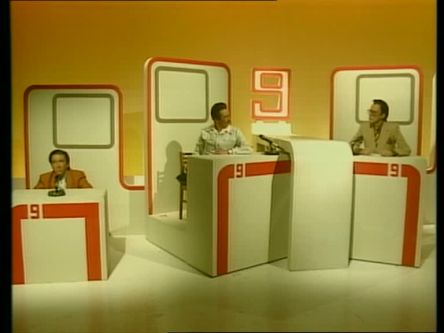 But there were more. There were also Ken and Kenneth the rude tailors, Louis Balfour, the easy-going host of Jazz Club, the man who said about everything in his life whether it was good or bad “which was nice”, the old-fashioned football pundit Ron Manager, the rambling elderly Rowley Birkin, car salesman Swiss Toni, Ted and Ralph, the man who would appear and say “you ain’t seen me, right?”, and pub bore Billy Bleach who often turned in up strange places and say “someone’s sitting there, mate”. There were also plenty of one-offs and the theme song was “Release Me”. 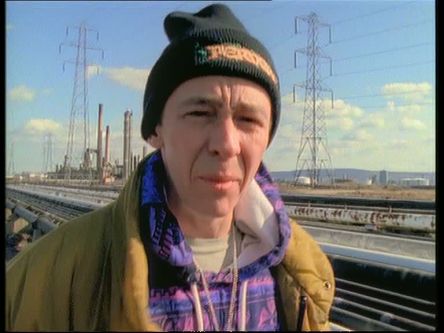 The Fast Show originally ran for three series, and when the final series ended in 1997 it had become very popular with viewers and it wasn’t the end by many means. There was also a successful stage show which toured the country. There were also many spin-offs, with Ted and Ralph being given a feature-length extended show (which was written by the creators of Father Ted), and the Swiss Toni and Billy Bleach characters also getting their own sitcoms. There was even a game show spin-off on Sky1 which was Jumpers For Goalposts featuring the Ron Manager character among the panellists.

The Fast Show has also occasionally returned to the TV, with some characters appearing in adverts, most notably for Holsten Pils. There have also been some specials including some more episodes in 2000, and there was also a theme night which featured some previously unseen sketches, and a special show looking back at the best sketches. In more recent years there have been some more sketches made for YouTube which have been repeated on TV. All the episodes have also been released on DVD.

The Fast Show is definitely one of my favourite comedies of this era, with so many terrific characters and memorable catchphrases that still linger over two decades later when most shows who try to create sketches that will connect with viewers are long forgotten. In more recent years Paul Whitehouse has gone back to working with Harry Enfield, creating a double-act who have had more success with a new bunch of characters. Fantastic!