If you’re a regular visitor to this blog, you will know that I have been a fan of TV shows hosted by Chris Tarrant over the years. However, despite the enthusiasm that he always puts into hosting, I haven’t enjoyed that many of his game shows, you could say that for every Who Wants To Be A Millionaire there is a Man O Man, but this is one of the more interesting ones.

The origin of this show goes as far as back 1982 on ITV, when Clive James On Television launched. After his departure (although he hosted a similar show on ITV in the late-90s), celebrity chef Keith Floyd took over for one series in 1989. Tarrant then became host in 1990, and this is the era that I remember watching the most. Tarrant On TV was a look at some of the more unusual TV moments that happened around the world, accompanied by Tarrant’s wry observations.

This made the show seem to be somewhere between a cross of It’ll Be Alright On The Night and You’ve Been Framed! As well as looking at things like rude adverts and tacky soaps where it was difficult to tell if it was a parody or not, the show became most famous for featuring various ridiculous Japanese game shows where a lot of painful and dangerous challenges had to be completed.

As well as all this that was played for laughs, there were also be some more serious moments that stood out because they contained a hard-hitting message. A lot of trashy TV moments were covered, and there were also lots of specials. These included Ten Years On TV, looking back at a decade’s worth of highlights. And there was also Tarrant On CCTV, where various people were unexpectedly captured on camera doing some unusual things. 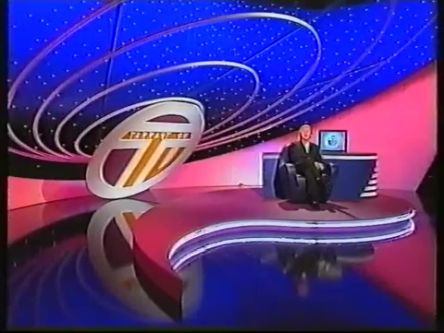 Tarrant On TV (along with its funky theme music in the later series) ended up running for 16 years (in addition to the eight years hosted by his predecessors), although by the 2000s it was shown rather late at night and had reached the “is that still going?” point with some viewers, being left to slowly fizzle out, rather than being dropped by ITV altogether.

Also by this point, some people had felt that the show had become a little hypocritical to insist that British TV was superior to foreign formats because of the increasing amount of Big Brother-type shows taking up more and more airtime on various channels in this country, and the “look at these funny foreigners” tone had become tired. Overall though, there were lots of memorably bizarre moments that were always guaranteed to cause a shock.