Sometimes when you go on YouTube, you fall down the rabbit hole as they say. You plan to watch one video about something, and then you end up watching another, and then another, and you then realise that a lot of time has passed when you had planned to be doing something else. A while ago I wondered if there were any old snooker matches online. I don’t know why really, I just thought that I’d have a look, and I was surprised by how much has been uploaded.

I’ve never been any good at the game (or is it a sport?), but snooker became very popular with viewers for a while in the 80s and 90s. This was because most of the leading players were British and charismatic, and also because matches could easily fill hours of airtime and get good ratings. And of course the launch of colour TV helped somewhat too, marvellous. Every sport on the BBC and ITV seemed be introduced by a famous piece of theme music, along with a veteran commentator who was considered to be “the voice”, and in snooker’s case this was “Whispering Ted” Lowe.

There were also some memorable presenters including David Vine on the BBC, and Dickie Davies on ITV. An account that has uploaded classic frames and matches to YouTube called “mjt_snooker” has complied various opening sequences from over the years from continuity clips, and as the sequences often changed throughout the 80s and 90s, I thought I’d pick out some of my highlights.

The World Championship has been held at the Crucible Theatre in Sheffield since 1977, but several other tournaments have been televised too. I imagine that with a lot of these sequences, the designers thought “how can we make snooker look exciting?”. The BBC’s most famous theme “Drag Racer” was introduced in the late-70s. By the early-80s a sequence cleverly featured the BBC2 symbol appearing on a ball.

I liked the sequence used in 1981. This was still before computer animation was really possible, but it did feature some nice airbrushed effects as the balls went into the pockets. Meanwhile, ITV in 1982 had the very impressively-named tournament The Yamaha Organs Trophy, accompanied by the theme “Sprocket Shuffle”. Around this time, the sequences changed almost once a year as the technology advanced.

By 1984 ITV were bringing us The Lada Classic, the one they all wanted to win I’m sure, and a lot of triangles. By 1986, ITV’s opening did feature some computer-generated elements, but this was in the days where the balls looked more like cubes. Also around this time the BBC briefly changed their theme music to “To The Unknown Man”, although that probably wasn’t a popular move. 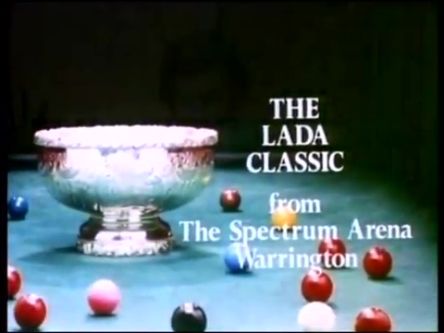 In 1987 ITV finally had a fully computer-generated opening sequence, with a mildly scary robot man who had things like “access risk” flash in front of his eyes, which was a memorable way to introduce The Mercantile Classic. By the late-80s the music had been changed, and snooker coverage was beginning to fall out of favour on ITV. By the early-90s, the openings became ever more elaborate. On the BBC, a cue on the camera effect was used.

Around 1991 was when the first sequences that I remember were introduced, including on the BBC an unusual camera under the table effect, along with scoreboards flashing and a referee moving the balls around. This was then changed to a nice kaleidoscope effect, and by the late-90s there were people made out of balls and the music had been remixed.

By the late-90s, the evolution to fully computer-generated openings was complete, and coverage could now be moved to the additional BBC and ITV channels, along with coverage on satellite channels including Sky Sports. This meant that ITV were back in the game, with an rather surreal opening sequence where the balls were floating around someone’s head as if they were planets while they pondered their next move, accompanied by “All That Glitters”.