This is someone who I wanted to feature because although he is another host who might divide opinion, because of his longevity, and the sheer number of game shows that he has hosted (which I think might be just about more than anybody else now), I think that he has earned a place in this series. And once again, I’m fairly sure that he is following me on Twitter, but that hasn’t influenced my decision, no, really, it hasn’t.

Eamonn Holmes started out on TV in the early-80s, as the host of the news in the UTV region, and at the time he was the youngest news host anywhere on ITV. His career beyond this has taken in lots of other things, including being one of the launch hosts of GMTV, but I’ll concentrate on the game shows for now. A lot of them that he has hosted have only been shown in Northern Ireland, so of course I haven’t seen those ones.

But of the ones that I have seen, I do remember some of them were shown in a daytime slot. He was the second host of Pass The Buck, and TV Scrabble on Challenge. But one of my favourites is Playing For Time. This was partly because in the final round when the contestant looked like they were going to win the star prize, he would get rather excited, and it always amuses me when the host gets more excited than the contestant by a big win.

He then went on to further shows in a primetime slot, including Jet Set and Hard Spell. And there was also Sudo-Q, which might’ve seemed like it was jumping on the bandwagon when there was the first wave of the sudoku craze, but there was actually a decent game here (maybe I should review that one day too). He even hosted comedy panel game It’s Not Me, It’s You rather late at night on Channel 5.

In more recent years, he got married to Ruth Langsford, who might be a familiar face going back many years, if you were in the TSW region, where she was an in-vision announcer. They have gone on to host several shows together, including This Morning, along with the game Gift Wrapped. He is another one who I imagine will be hosting more game shows for many years to come.

And that’s it. This is planned to be the last entry in this series, as I think that 20 is enough for now. Thanks for all of your comments and memories. Although of course I have enjoyed many more people beyond the ones that I have featured, I feel that all of them have in various ways helped to shape and enhance game shows in this country more than most.

Playing For Time was a daytime game show which was based around the idea of time. It was hosted by Eamonn Holmes, who had a lot of shows on the go at the time but this was one of my favourites. Two contestants took part and they both began with 60 seconds on their clock. A general knowledge question would be read out which had three choices of answer. The clock began and didn’t stop until the contestants made their choice. If they both got it right, they are both asked another question. But if one of them got it wrong, they would be asked a timewaster question.

This wouldn’t be a general knowledge question about something that you could know in advance, but a logic question similar to the ones asked in the mental agility round on The Krypton Factor where you would have to take a moment to pause and try and to work out the answer. During all of this, their clock would continue to run down until they gave a right answer. If they both got the multiple-choice answer wrong though, another question was asked on the buzzer, with the contestant who got it right’s clock stopping, and the one who didn’t being asked the timewaster.

This carried on until one contestant’s clock ran out of time. The contestant with time remaining had it added to their bank. This round would then be played again, if a contestant won for a second time, they then had a chance to play in the final. But if it was one game each, there would be an extra round to determine the winner, with contestants being asked questions alternately in a chess clock format until again one ran out of time. 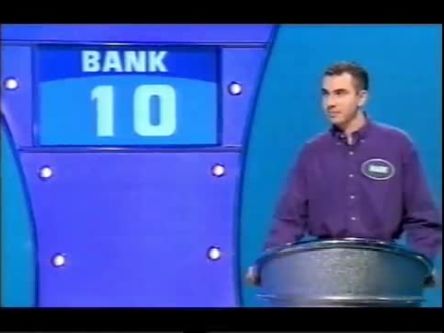 The winning contestant then had a dilemma. They could use the time that they had banked in the rounds to play the final game, or they could carry on against another opponent, knowing that if they get beaten by them then they lose their chance of playing in the final, but they could gain even more time. They were also given a brief look at who they would face next, along with some facts about them which were rather useless as they were just about unreadable on screen.

In the final, the contestant had a choice of three holiday destinations in Europe. Using the amount of time that they had banked over the one or two matches, they simply had to get five questions right. If they had a lot of time, this wasn’t too difficult, so there wasn’t much tension, but Eamonn would make up for it by becoming rather overexcited as the contestant was about to easily win, and he’d often yell “an eternity left in the bank!”. If they did run out of time though, they missed out. The next two contestants would then come on and play and games would often straddle into the next show. 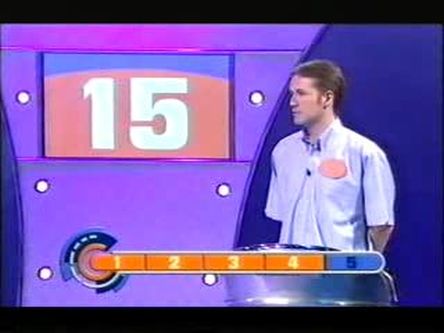 Although his was a rather short lived show, the UK Game Shows website has a detailed entry on Playing For Time, proving that someone clearly watched it at the time and preserving what the show was all about 15 years after it ended, and it raised some interesting points about the show’s flaws and possible strategies that contestants could use. Maybe one idea that could have been good was if they answered questions in the final based on how much time they had, say five right in 50 seconds, six right in 60, seven right in 70 and so on. Watching people having to get five questions right in 90 seconds isn’t too challenging. But either way there were some good ideas on show here and it ran for two series.