This is a collection of programmes and adverts that caught my interest. This is because they are from A Night Down Under, a special theme night that was shown on ITV around midnight-6am on 26 January 1997 to celebrate Australia Day. These clips were recorded in the ITV Central region and uploaded to YouTube by “Axion”, and I remember that I recorded some of this night myself (in the LWT region), here are some of the highlights.

Inbetween the shows we had an insight into Australian life as we said G’day to presenter Jonathan Coleman who was also on Virgin Radio at the time (and I think I’m right in saying he was actually born in Hackney, which definitely isn’t in Australia), and throughout the night there was a chance to see some of the culture along with some TV shows that are popular down under. 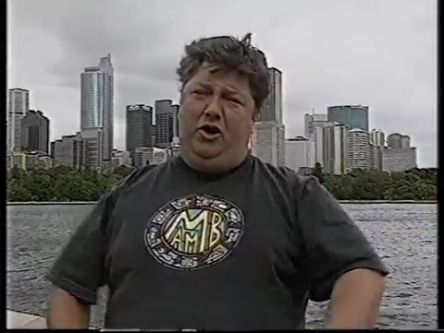 As it’s past midnight, we begin with the famous advert for Chat Back, that must have been shown on every other break on ITV night time from about 1993 to 2000. “0891 50 50 50” indeed. This service may involve a long call. Adverts also include Kellogg’s Rice Krispies (that sounds like it’s voiced by Chris Evans), and the MFI sale. But it’s not even Boxing Day!

Then there’s an advert that I can’t help think has been deliberately placed here as it’s for Foster’s, during the time that it was advertised by the Aussie duo Roy and HG. I think I’m right in saying that not long after this they got their own comedy show that was only shown in the ITV Anglia region at around midnight, so if you live and Norwich and like gags about Vegemite you’re in luck. “Tickle it you wrigglers!” is also a catchphrase that was probably said by no-one ever.

Also featuring is Peperami, excitement as News Of The World has a free gift of a poster of that bloke off EastEnders, and what must be about the 100th advert for Flash with Karl Howman, it does the tough bits so you don’t have to. Following a few more adverts (but none for Kanga Brew unfortunately), we have a mishap as instead of going into the next show, we get some colour bars on screen instead. 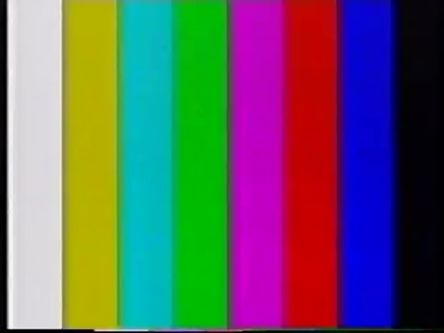 Eventually it turns up though, and it’s Shark Bay, a parody of Australian soaps, including Shane off Home And Away, how amusing. After a break including another advert for Foster’s, we go into what was one of the highlights of the night for me, and the reason that I set the video. It’s the first ever episode of soap Home And Away from 1988! This ran on ITV from 1989-2000, before moving to Channel 5 in 2001 where it remains to this day.

After a few more adverts (including Chat Back yet again Kellogg’s Frosted Wheats), we see the thrilling cliffhanger at the end of Home And Away, I can’t wait for the next episode. We then meet a few more people having a boogie with Jono, but this is where the video ends, so we don’t get to see the rest of the night which included a concert from Crowded House in Sydney, an episode of Skippy The Bush Kangaroo, and some rugby highlights.

Although I have already written on this blog about the history of ITV regional companies and ITV’s Night Time programming, I thought that I would review this. I still find it something of a surprise that I can watch videos of regional ITV online from parts of the UK that I haven’t been to, and I can finally experience what some of the presentation across the country was like beyond where I live in London.

Around 1987/1988 ITV extended its hours, and several regions decided to introduce their own strand where in-vision presenters would try to not odd off and keep viewers company through the night by introducing various shows until TV-am started at 6am. The TVS region’s strand was the oddly-named Late Night Late, and it has been a good experience to see some of this on YouTube (so thanks to the various uploaders).

Late Night Late launched in January 1988, actually before TVS went all the way to 6am from June 1988, originally finishing around 3am and being followed by the epilogue programme Company. Late Night Late featured a entertaining group of presenters including Graham Rogers and Laura Penn, who would soon become familiar to viewers and they all had the job of introducing the various shows that would fill this slot, including Donahue, America’s Top Ten, and the seemingly endless Prisoner: Cell Block H.

It seems that Late Night Late did try to put some imagination into what it showed, including cult programmes from the ITC archive like Randall And Hopkirk (Deceased), and viewers were invited to write in and request what they would like to see again. This interaction was encouraged, and there were also competitions to win prizes, and even phone votes on what film should be shown from a shortlist. 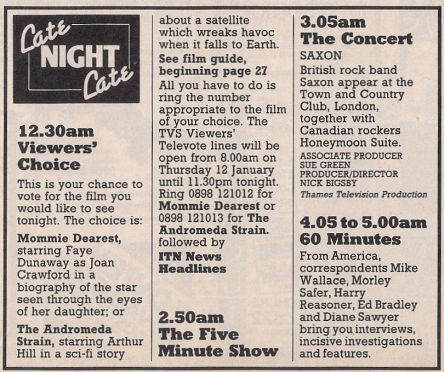 As well as this, there were also occasionally some guests in the studio, usually people who were appearing in the programmes that were being shown to share some of their memories. It seems that all of this went down rather well with viewers (and by the end there was a change in the set design so it no longer looked like it was coming live from a spaceship), so it was something of a surprise when in August 1991 Late Night Late ended rather suddenly to be replaced by a generic service that was also taken by various other regions.

Things were never really the same and it seems that a lot of viewers were disappointed. However, when Meridian replaced TVS around 1993/1994 they also had a late-night strand, even bringing back Graham Rogers as an in-vision presenter. Another ITV region that did something similar in the late-80s/early-90s was HTV with its Night Club, and I plan to review that soon too.

In the 1990s, ITV actually put something of an effort in the fill the late hours of their schedule. There were several strands including LWT’s 3 Nights that were all vaguely under the ITV Night Time banner, and some of these shows were rather good and attracted something of a cult (small viewing figures, carry on…) following.

One of them that was particularly memorable was a crazy cookery show with a difference where the episodes were only about five or six minutes long and various people would show you how to make tasty meals on a budget of tuppence ha’penny.

The show was hosted by two crazy guys called “The Mystery Chefs”, who I also think were the producers of the show, and also practically the whole of the production team it was so low-budget.

Each episode featured a couple of people, usually greasy haired students telling us how to make bizarre meals accompanied by guitar music, slide whistle noises with instructions written on pieces of tatty paper. Indeed, this style was even parodied on The Day Today with Graham Linehan, and there can be no higher praise than that.

I remember watching a few episodes on some tapes from the 1990s, and then for some strange reason, around 2002-2003 ITV1 started a repeat run of various episodes so as they were usually shown at around 4am I decided to set the timer to try and capture as many of them as possible.

I very much enjoyed watching these episodes so about three years ago as I presumed the show would be very obscure by now some people might enjoy seeing some episodes so I put one on YouTube.

Not long after, I got a message saying that my video had been removed following a copyright claim from the production company, giving me one strike. I was very surprised. I presumed the company had long since vanished and nobody would be bothered. I wouldn’t have been too surprised had a claim come from a company such as LWT or Sky, but the only people ever to have given me hassle about my videos were flippin’ two-men-and-a-dog Last Ditch Television?! 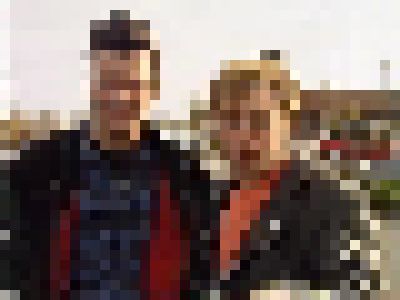 No! You can’t look at this!

Now if you get three strikes, you lose your entire YouTube account so it was lucky that I didn’t upload any more episodes as I was planning to. Also, I noticed that other people who had uploaded episodes of this show got copyright strikes too much to their frustration. The mighty Applemask nearly lost his account because of these plonkers because he uploaded ONE MINUTE of a 20-year-old episode.

I mustn’t sound too bitter though, as I do still really like the show, but it’s a great shame that there are no archive clips online because the dozy company are so precious about it. I can only imagine that The Mystery Chefs are waiting to strike a deal with a company to release all 284 episodes in a fancy DVD boxset. Mmm, tasty!