This is another CITV sitcom, although as it was made on location and contains no laughter track, it could be considered to be more of a fantasy comedy-drama. Mr Majeika was based on a series of books, the first one was published in 1984. The TV version starred Stanley Baxter, someone who was one of the most popular TV personalities of the 70s, who was making something of a comeback, and won over a new generation of fans.

Mr Majeika is a wizard (but not the wizard from Top Of The Pops) from the planet Walpurgis who has failed his sorcery O-Level for the 17th time, much to his frustration. He is sent to Britland, and lands in the small village of Much Barty which is rather sleepy, although it won’t be from now on. With his suit, bowtie, and big glasses, the locals soon realise that he is somewhat out of place.

He then becomes a teacher as St Barty’s Primary School. He is welcomed by the long-suffering headmaster Mr Potter, and he soon befriends the pupils Melanie Brace-Girdle and Thomas Grey, as unlike most they admire his sorcery and personality. But he also has to deal with the awful pupil Hamish Bigmore, who has caused so many previous teachers a lot of grief. He can do this by usually magically wiggling the sticky-up part of his hair and performing a spell on him, and he is soon put in his place. 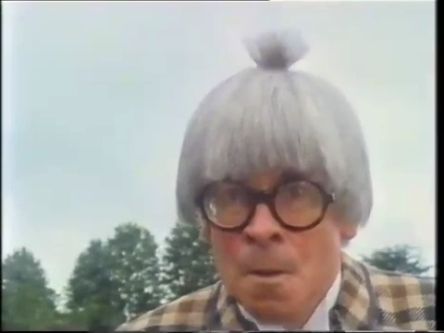 All the time, The Worshipful Wizard Of Walpurgis keeps an eye on Mr Majeika, making sure that he doesn’t step out of line, but he simply can’t resist using his spells at school, and the pupils soon realise that there is something rather magical about him. When he isn’t at school, he likes to go around on his bike, and lives in a nearby windmill, trying to learn various new spells.

There were 20 episodes of Mr Majeika in three series, and they were full of enjoyable characters, inventive ideas and charm. The first series was shown on Sunday afternoons, usually before Bullseye. It seems that someone at ITV must’ve been fond of it though because there was then an hour-long special on Christmas Day in 1988.

The second series was shown on Saturday afternoons, it was only the third series that was shown during the main CITV afternoon strand, there was also a repeat run on The Children’s Channel, and the books continued for many years after. Don’t expect a DVD release any time soon though, because as it was a TVS Production, all of the paperwork (and probably the actual tapes of the show too) are now lost at the bottom of a skip somewhere.