It’s time for another CBBC show review, and this is one of those shows that when you look back it at as an adult makes you realise just what a bizarre idea it was, although it was definitely good fun. The main character in Green Claws was a rather odd-looking hairy old large green thing that wore glasses. I wonder if he was a distant relative of Fungus The Bogeyman?

He lived in a tatty old greenhouse, and as we’ll soon discover, he was fond of growing some rather unusual plants, he wasn’t good at much else. His best friend was a young woman called Iris who seemed to be fine with befriending such an unusual character, and she often called him “Claws”. He also owned a parrot called Percy. Every edition of Green Claws roughly followed the same format.

A rather colourful seed would be chosen from a selection, and then this would be planted and watered, and then the pot would be placed in the secret growing place of the riddle tree. When it is fully grown, it will be announced by the owl called Owmla that sits in the tree. Fortunately, unlike Claws, Iris (whose catchphrase seemed to be “flying ambulances!”) is able to understand what the owl is saying and passes the message on.

Also featuring was a part where Claws would tell an unusual story about one of his many relatives, and this would be accompanied by various illustrations. There would also be a part that was made on location featuring only Iris usually on her bike where a song would be performed. At the end of the edition, Owlma would announce that the plant was ready. 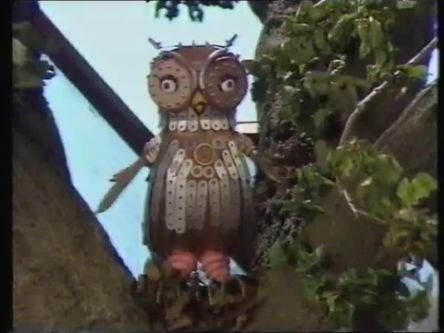 Owlma would then ask three cryptic questions, and if Claws and Iris got them right (which they always did of course), the plant would finally be revealed. I remember this being one of my favourite parts of the show as the plants were always very creative, including things such as having multicoloured leaves, or leaves with various food such as cakes or ice creams that would soon be eaten.

Every edition of Green Claws was 15 minutes long, and I do remember enjoying it first time round, although it seems that none were ever released on VHS. As well as being shown on CBBC, it was also regularly repeated on BBC2 well into the mid-90s. And it was yet another one of those shows that was repeated on the CBBC On Choice strand around 2000, which as you should know by now I used to be very fond of as it mostly consisted of repeats of CBBC shows from the late-80s/early-90s. 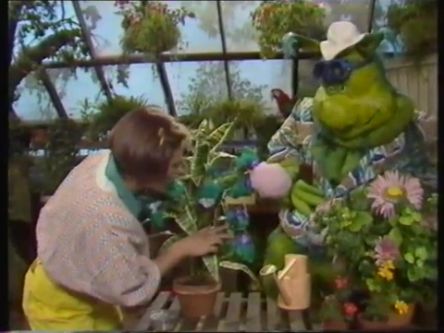 I was pleased that Green Claws was among the shows that was repeated, and not only did I enjoy seeing it about a decade on from its original run, watching it again now about three decades after it was first shown on CBBC was still an enjoyable experience. It was clearly a show that had a lot of imagination put into it, and I’m still a little disappointed that plants don’t really grow cakes on their leaves.