This is someone who although he didn’t host a lot of game shows, he definitely became a well-known figure in that area. William G Stewart (the “G” stands for Gladstone) had a career in TV that lasted for over 40 years. He started out working behind the scenes of various shows, and he went on to be the producer and director of some 60s and 70s sitcoms, arguably the most famous of these was Bless This House (he also contributed to some documentaries on what it was like to work with Sid James).

By the early-80s he went on to work in game shows, including Family Fortunes and The Price Is Right, where he made sure that even if people hadn’t been invited to “come on down”, they still all had a good time. By the late-80s, his production company were commissioned to produce Channel 4’s new daytime game show Fifteen-To-One. Not being sure who should be the host, he decided to go in front of the camera himself.

Fifteen-To-One was of course the game show where contestants were challenged to show off their general knowledge, and were eliminated until one remained. He was also on the team of writers, usually contributing questions on the subjects of history and politics. As the years progressed, the show began to develop its style, and became known for doing things such as giving away antiques as the prizes. By the early-90s, the show was popular enough for there to be a celebrity edition.

He then went on to host Famous People, Famous Places… on ITV (and this was later repeated on Channel 4), but this lasted for only two weeks, and is mostly forgotten now. Fifteen-To-One had now settled into being an daytime game show that was as popular as the long-running Countdown, and he also hosted a special edition when Richard Whiteley and Carol Vorderman were the contestants.

Going into the 2000s, Fifteen-To-One was at the point where a group of contestants regularly made the grand final with rather high scores, and some felt that there were now too many “proper” quizzers taking part. When the show did finally come to an end after 16 years, there had been over 2,000 editions, and by this point he was regarded as one of the best hosts around, always making sure that people maintained a good standard.

There was only ever one scandal that put the show’s reputation at risk, when a series champion was stripped of his trophy for bending the eligibility rules. After this, Stewart just about retired from TV, although he did also contribute to Celebrity Mastermind and The People’s Quiz (but he was turned down by Strictly Come Dancing). Although he probably didn’t expect it to happen when he started out, he became a much respected person in game show circles.

If you are a regular visitor, you will know that I have been a fan of Fifteen-To-One for many years, and I have reviewed several variations. But did you know that William G Stewart hosted another game show in the 90s? Famous People, Famous Places mostly centred around questions on historical figures and world landmarks (Stewart had a keen interest in history and wrote most of the questions on that topic for Fifteen-To-One himself).

Five contestants took part, and they all started with 100 points, but there’s no question or nominate here. There are six rounds, and questions are asked in three parts. After one clue is given, they are worth five points. After two, they are worth three points, and after all three, they are worth one point, by which point the answer should be fairly obvious. So the earlier they get it right, the more they score. 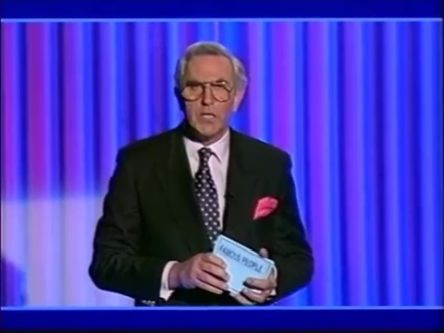 In the first round, contestants are asked two questions each (similar to the “who am I?” ones on Going For Gold). If they get it wrong though, their opponents have a chance to steal. This would also be accompanied by a split-screen effect, with the contestants appearing in close-up and a wide shot at the same time. Correct and incorrect answers were indicated by some rather familiar sound effects. I don’t remember if any of the questions were about “my good friend Nick Parsons” or “Frostie” though (as Stewart called Nicholas Parsons and David Frost).

In the next round, questions are asked on the buzzer. Whoever gets it right gets the points, and they can also deduct the same number from one of their opponents. Getting it wrong passed it over to the contestant who buzzed in second. This meant that there was plenty of scope for some strategic play. After ten questions, the contestant with the lowest score is eliminated. They are simply told “your light goes out” and they have to sit there in silence. It’s hardly The Weakest Link, is it? 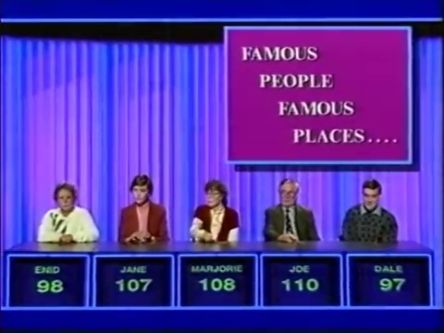 After ten more questions, a second contestant is eliminated. After the break, the three remaining contestants face more questions, although this time there is the addition of some categories to choose from, and also some picture clues. The highest-scoring contestant is declared the winner. There were no prizes on offer or knockout stages, simply the honour of knowing that you beat all your rivals.

There were only eight editions of Famous People, Famous Places, compared to almost 2,500 of Fifteen-To-One. It was a Regent Production (Stewart’s own company) for Thames, and shown in December 1992 which was their final month on air (which might explain the small number of editions) in a daytime slot when they’d had enough of Blockbusters. I’m fairly sure that there was also a repeat run on Channel 4 not long after.