Let’s carry on the story then. In 1983, “Walking In LA”, the final single from “Spring Session M”, was released, which reached no. 70 in America. This is another one that doesn’t seem to have a video. I don’t know how much touring they did, but they performed a rather high-profile gig at the US Festival, where they were on stage for about an hour to perform all the songs that were now rather familiar. It was a lot of fun. Thankfully the crowd at this concert clearly enjoyed them and there was a much livelier response.

In 1984, “Give” was released. This was the first single from the second album “Rhyme & Reason” which reached no. 43 in America, while “Give” reached no. 67, and this turned out to be their final hit single in America. This is one of my favourites, their sound was beginning to move away from guitars, it’s rather synthy, Terry has got hold of some of those hexagonal-shaped electronic drums that were popular at the time, and Dale looks the most Gaga-esque she ever did. 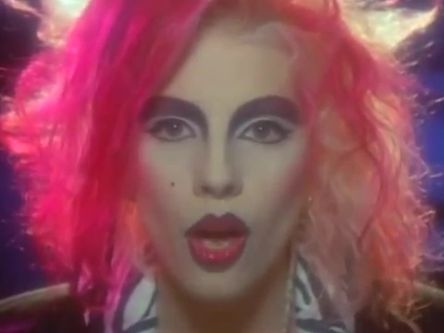 I also noticed in a lot of magazine articles around this time that Dale was often being grouped in with Terri Nunn, another extrovert female American singer who was on the up at the time, who did go on to have a chart-topping single in the UK in 1986 with “Take My Breath Away” as the frontwoman of Berlin.

In 1984, although their hits were now behind them, they were still releasing some good singles, and “Right Now” was the next one. For a group that had no Top 40 hits in America, they appeared on the early days of MTV rather frequently, and the exclusive showings of their videos were still anticipated by many viewers, even if their success was beginning to drop off a little. Dale also appeared on the Australian pop music show Countdown. 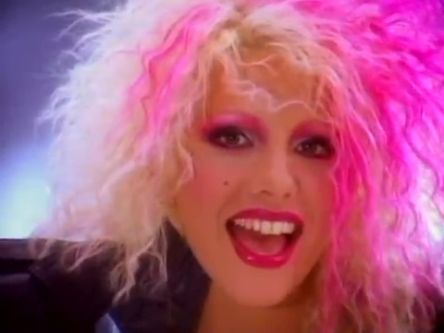 In 1984, “Surrender Your Heart” was the final single to be released from “Rhyme & Reason”. The video didn’t feature any new footage of the group, just a montage of some visually impressive for the time rainbow-coloured pictures. There was also a disc released with this title featuring four of their music videos.

Not much happened in 1985, but Missing Persons appeared on Razzmatazz again in August, although this seems to be a repeat of their 1982 appearance as part of a compilation special of American acts to have appeared on the show. Dale also featured in a TV Times article about female American pop stars, where once again she was grouped in with Terri Nunn, along with Madonna, and said “I like bizarre outfits made from plastics and materials not normally used in clothes design. My attire is not meant to be deliberately outrageous”. And also in 1985, the pop music cartoon Jem launched. Some people have speculated that Dale’s look might have inspired some of the characters. I don’t know if that’s right or not, but if it is, that’s truly outrageous!

They were back though in 1986 with their third album “Color In Your Life” which reached no. 88 in America. There had been some changes by this point however. The group had slimmed down to a quartet, Dale had got rid of the blue hair (more’s the pity), and she had become a long blonde-haired tight-trousered rock chick. And also on the production team was Chic’s Bernard Edwards. 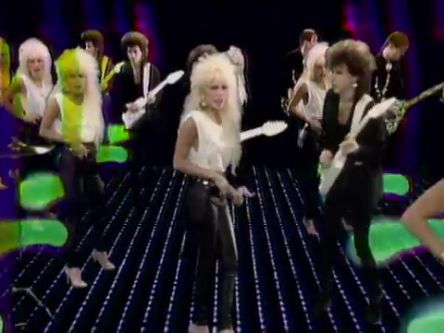 The first single from this album was “I Can’t Think About Dancin'”. This is my favourite single of theirs, and also my favourite video, featuring the group on a scrolling stage cloned several times over. It must have taken a long time to put together, I wonder how they did it. Unfortunately some people felt that this new direction didn’t really suit them. By this point, their touring had come to an end, Dale and Terry divorced, and Missing Persons split. It’s not a coincidence that all three of those things happened at once. Terry would go on to work with various other groups, and Warren Cuccurullo joined Duran Duran. In 1987, little happened beyond a fairly ignored best-of album being released. But the story doesn’t end there…

In 1988, Dale returned with a solo project (credited simply to “Dale”), and joined Prince’s Paisley Park label in an attempt to regain some creditability and get back into favour, taking more of a dance-pop direction. Dale released the album “Riot In English”, and the single “Simon Simon”. Now I found this unintentionally amusing because it reminded me of that whole ludicrous “Simon, bid again, Simon!” trail that was briefly on Bid-Up.TV all the time. But it wasn’t a hit, honestly, don’t people know quality when they hear it.

And that’s about it really, Dale later twice remarried and had two children, a version of Missing Persons continues to this day, and there have been some more albums released, although the line-up is now very much Dale and some blokes. Life is so strange…

Recently I have done some pieces about quirky singers and pop groups from the 80s. I was wondering if there was anyone else who could be featured here. I don’t get too excited about the modern wave of pop stars, the last ones I had an interest in came on to the scene about a decade ago now such as Paloma Faith and Lady Gaga. I did wonder if there was anyone who could fit the description of being “the Lady Gaga of the 80s”, and I was pleased when I discovered someone who definitely could.

The group is Missing Persons, and it’s always good to discover that a group that I had previously barely heard of and realise that they had an interesting story in the 80s. Their frontwoman is Dale Bozzio (I can’t recall ever coming across a woman called Dale before). Dale Consalvi was born in March 1955 in Massachusetts. Before getting into music she appeared in some rather naughty magazines, and went on to collaborate with Frank Zappa.

In 1980, Missing Persons were formed, they could be put into the New Wave genre. They were a quintet, and along with Dale, other members included drummer and Dale’s husband Terry Bozzio (they married in 1979), and guitarist Warren Cuccurullo. Although they didn’t have any hit singles or albums in this country, I wondered if they had made any UK TV appearances, so I went on YouTube, and I was pleasantly surprised. As always, this piece won’t be 100% accurate or comprehensive, but here are some of the highlights of their story. 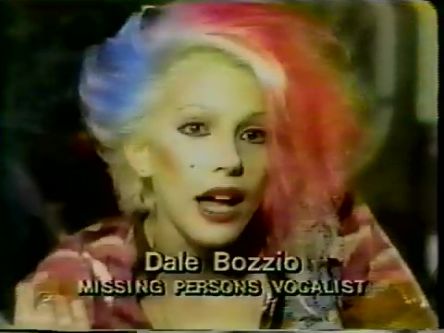 Dale was the definition of small but perfectly formed, with a very distinctive look, including her hair, which was sometimes red, or even – yes! – blue, and plenty of make-up. She also wore what were often described as “fishbowls” containing some foil. It seems that she was rather pleased with her looks and followed the old phrase “if you’ve got it, flaunt it”, and if she had half the chance she would probably have worn nothing at all above the waist on stage. Dale was also known for having a squeak in her singing voice. I very much doubt she’s been to any pubs near where I live, but I’ll let her off because she made some great songs.

In 1980 the “Missing Persons EP” was released, which reached no. 46 on the US album chart, and they appeared in the 1981 film Lunch Wagon. But it was during 1982/1983 that they had their biggest success. In 1982 their first single “Mental Hopscotch” was released. It wasn’t a hit, but there was a video made. There was also a video made for “Noticeable One”, but that wasn’t a single.

But next up in 1982 was “Words”, and this is arguably their most famous song. The video has had 6.6 million views on YouTube, making it their most popular. This reached no. 42 (their equal-highest placing in America), and it also reached no. 10 in Australia, which I’m sure is their first and only Top Ten placing on a singles chart anywhere in the world. This one contained the lyric “I think I’ll dye my hair blue“. Please do! Also in this year, their first album “Spring Session M” (an anagram of “Missing Persons”) was released, reaching no. 17 (their highest-charting album in America), and no. 40 in Australia, where they loved it. 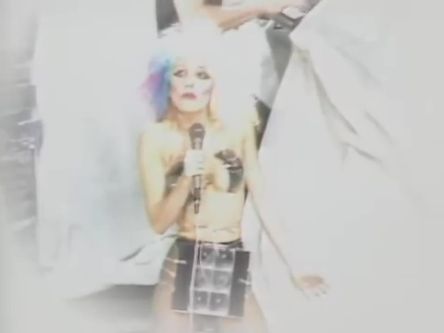 Then in 1982 the next single was “Destination Unknown”, another one of their more well-known ones. This also reached no. 42 in America, and no. 89 in Australia, their final hit there. This one had a video, and I know that I shouldn’t take too much notice of YouTube comments, but the amount of people who have said “Lady Gaga stole her look from Dale” is remarkable. They performed this one on various shows including TopPop in the Netherlands. 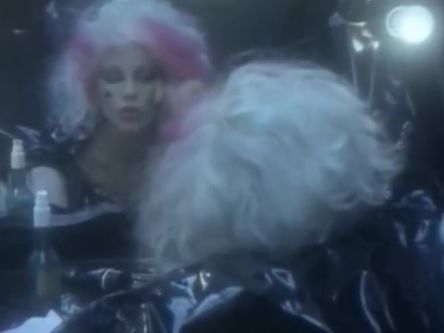 And in October 1982, they made what I’m sure is their first UK TV appearance, when they performed “Destination Unknown” on CITV’s Razzmatazz! They weren’t exactly the first group that I would expect to appear on the show, but the youngsters loved them I’m sure. Dale also had a rather unusual hairstyle by her own standard at this point. I doubt it’s all her own work. I don’t think they played “Peggy Babcock” though. Missing Persons were now doing well, suddenly Dale was being invited to awards ceremonies, and plenty of people were taking notice of them.

In 1983, “Windows” was released, which reached no. 63 in America. I couldn’t find a video for this one, but they did perform this on shows in various countries. And in March 1983, Missing Persons made another UK TV appearance when they performed a few songs on Channel 4’s The Tube. There was the slight problem that they provoked almost no response at all from the studio audience who seemingly had no idea who they were.

Also in March 1983, Dale appeared on the cover of Sounds, which I’m fairly sure is their only UK weekly music magazine cover, where they were tipped to be the next big thing. Dale is someone who also gave good value in interviews. And although they didn’t feature in an article, an advert for “Words” (which was released in the UK in this month) appeared in Smash Hits.

Watch out for more in part two…