A while ago I did a piece on Double Dare, the fast-moving game show that was often shown as part of CBBC’s Saturday Morning fest Going Live!, and it was definitely one of my favourites from that era. I thought about if I could do another piece about this show, when I remembered that there was also a variation that was used occasionally, usually around Christmas.

Celebrity Double Dare featured two teams of two famous faces. The host, as ever, was the award-winning Peter Simon. And this was long before he constantly shouted “10% of the stock has gone already… you’ll need to be doing it now, awight” on whatever little-watched shopping channel he’s on this week. The crazy gunge-filled games were the norm for Peter, but it might be something of a surprise to the celebrities.

I have decided to review an edition from the early-90s, when the teams were made up of people in sitcoms. The blue team were Bread‘s Jean Boht and Victor McGuire (who would later go on to appear in Goodnight Sweetheart), and they were up against the red team of Lesley Joseph from Birds Of A Feather and Herr Flick from ‘Allo! ‘Allo! The aim for all of them was to try and win some special prizes for their chosen charities. 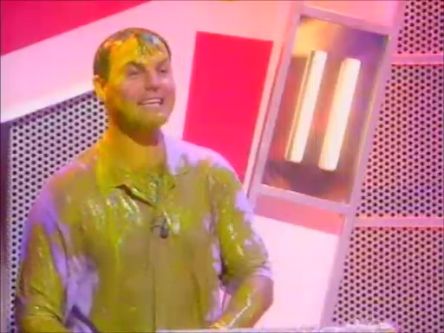 The first game is about to be played, to determine who wins control of the game, and it’s the red team that get the ten points! After some questions, the red team decide to do a Physical Challenge. They have to put the ears, arms, and legs back on a teddy bear in 30 seconds, but they will be blindfolded, so it won’t be easy. They do manage to do it, even though they had both ears on one side for a while, and they now have 60 points.

The blue team then decide to do a Physical Challenge. They have to get some toys out of a bubble bath (also containing a big rubber duck), so they’ve got their showercaps on. Jean ends up nearly falling in the bath, but they do succeed. After the points are doubled, there’s just time for one more Physical Challenge, with both teams involved this time. This one descends into chaos with everyone laughing even more than Bradley Walsh does on The Chase. Leave it at ‘ome!

When time is up, the red team have done it with 220 points! Then it’s time for the Obstacle Course. There are a rather generous 90 seconds on the clock, and again both teams take part, and they win with plenty of time to spare. That means there’s lots of board games for everyone, how terrific. It was simply another enjoyable edition of Britain’s most preposterous game show.