When Channel 4 launched, they promised a commitment to various types of programming. Among their schedule would be a soap, which might not have sounded that ambitious, but it was promised that this would be something a little different. Brookside was set in Liverpool, and was created by the same team behind CBBC’s Grange Hill. I must admit that I wasn’t a regular viewer over the years, although this is just about the last major soap that I haven’t reviewed yet (I know almost nothing about Emmerdale so I don’t plan to review that one).

Other soaps at the time produced their interior scenes in a studio, but Brookside was pioneering as their interior scenes were made in actual houses, which helped to add a more realistic feel. And as time passed, viewers would become rather familiar with the families and what they went through including the Corkhills, the Dixons, and the Grants, and the various locations that they visited.

Brookside did well in the ratings and soon became popular enough to be extended to three episodes a week. There was also a monthly magazine, along with some of the highlights from episodes released on VHS. By this point, various topics were being covered in stories, and some viewers were beginning to feel things were becoming a little far-fetched. 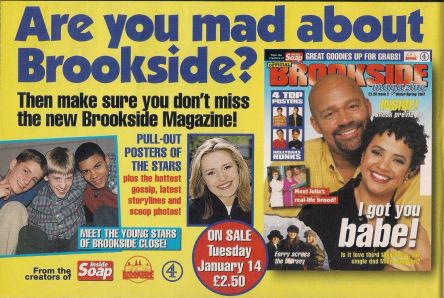 I also remember that plenty of vintage episodes were shown in a daytime slot on Sky One. And then, the regular evening slot was dropped, and Channel 4 began to concentrate on making Hollyoaks their priority soap. Brookside was then moved to a late-night slot, which was given a positive spin as it was claimed that this could be an opportunity to be more gritty and violent.

Most viewers had lost interest by now though, and after almost 3,000 episodes, things concluded in 2003 on a rather bitter note. Not many people felt that it was the wrong decision to bring Brookside to an end though after its initial popularity, and things did seem to end with something of a whimper. It was claimed that there would be more special episodes made to be exclusively available on DVD, but nothing really came of this.