One of the reasons I decided to launch this blog (rather a long time ago now) was to look back at some shows that I remember that there is little about online. One of the best examples of this was Harry And Cosh, shown for a short while on Channel 5 on Saturday afternoons in the strand for teenage viewers, and it was great to realise that many other people enjoyed it.

I noticed that around the same time the same production company made a few other shows, including CBBC’s Cavegirl (that I reviewed recently). However, there were also a few others, but I don’t remember watching them, so I thought that having liked those ones, I should go and give these a try. I decided to track this one down, and thankfully there were a couple of episodes on YouTube (credit goes to the uploader “GMTV GOLD”).

Just like Harry And Cosh, Billie – Girl From The Future, was created, written and directed by Daniel Peacock (who was in an 80s episode of Only Fools And Horses), and he also played one of the main characters in this one. The show was a mix of comedy-drama and science-fiction, and it was a spin-off from Morris 2274 (that was shown on Five about a year earlier, I don’t remember watching that one either). 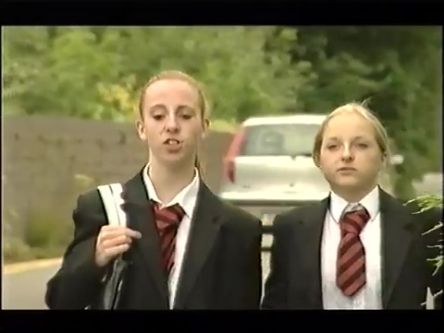 The idea is that a teenager called Billie (Fay Morgan) arrives at a family’s house in London, befriends their daughter Jane, moves in with them, and starts to go to school. But what they don’t know is, she’s arrived from the year 2274. And she does find it rather hard to adjust to early-21st century life and often stands out. We also hear her thoughts about what being a complete stranger in the year 2004 is like.

This means that we see her being unable to grasp basic present-day concepts such as  technology and food. Where she is from, everything runs on animal gas, and there are no wars. Also, Miss Spackman from Harry And Cosh was her teacher. After having to put up with the likes of Harry, Cosh, Lucinda and the others for so long, dealing with a girl who is a time-traveller from 270 years in the future should be no problem.

Billie – Girl From The Future was shown on Five in a Sunday morning slot, and it was shown again about a year later (although I think this was a repeat run), which means that there could’ve been as few as four 30 minute episodes made. This was from the time when Five were still putting some effort into making home-grown programming for teenage viewers (although I was 21 by this point, and probably in bed too, which might explain why I don’t remember it). I did enjoy it though, another forgotten good one.