It is usually around this time that the football World Cup begins, only this year it’ll be held in November and December. It has reminded me though that there has been a long history of football-related singles entering the chart, as a wide variety of unlikely people not usually known for their singing talents wish to declare their support for England (or whatever country) to record.

Almost none of them beyond 1990’s “World In Motion” and 1996’s “Three Lions” are worth remembering in much detail really. But to pick another as an example, once some various hosts from radio station TalkSport decided to release a song, and Mike “Porky” Parry said “you are here for the launch of the next Number One single!”, and I thought “oh really?”, but it almost happened when their racket somehow managed to reach no. 2.

But this one has a rather interesting story. The actor Keith Allen (who was actually born in Swansea, which isn’t really in England), had contributed to “World In Motion”, and also 1996’s “England’s Irie”. By the time of the 1998 World Cup, he decided to form the group Fat Les, also featuring artist Damien Hirst, Alex James from Blur, and I think Joe Strummer from The Clash was involved too.

In June 1998, “Vindaloo” was released, and this was a rather rowdy song that celebrated English culture, along with a chant-along chorus that it was almost impossible not to join in with. Indeed, a university professor’s performance of this during his YouTube video explaining the etymology of the word “vindaloo” was very popular for a few minutes a long time ago.

And also among the vocalists was Keith’s daughter Lily, who would soon know a thing or two about chart-topping singles herself. The video is also notable, as it is a parody of “Bittersweet Symphony” by The Verve. The original was made at Hoxton High Street, which is not too far from where I live, and this version was made there too, with the Richard Ashcroft role being played by comedian Paul Kaye.

Soon he is joined by a huge amount of people, who also include David Walliams and Matt Lucas (during their “Mash And Peas” years). “Vindaloo” reached no. 2, staying there for three weeks, and there was also a memorably shambolic performance of this on Top Of The Pops. Well at least it’s not “Sweet Caroline”! This was something of a success, and later in 1998, Fat Les appeared on the cover of NME.

In December 1998, they decided to aim at the Christmas market, when “Naughty Christmas (Goblin In The Office)” was released, although this reached only no. 21, and lacked rather a lot of the spark and humour of the previous single. They returned in June 2000 (this time credited as “Fat Les 2000”), with a straight cover of “Jerusalem”, which is considered to be the unofficial national anthem of England.

This reached no. 10 (and Michael Barrymore was roped in as one of the vocalists too). Then in June 2002 they released “Who Invented Fish And Chips”, clearly another attempt at a lingering anthem, but this got nowhere near the chart surprisingly. Since then, “Vindaloo” has returned to chart in 2010, 2014, 2018, and last year, and probably will this year too when the World Cup finally comes around again.

It’s time to take a look back at the year. It’s rather odd to think that 2018 has now happened and been consigned to history, as I still think that it’s about 25 years into the future. Four years on from starting this blog I am satisfied with what I have achieved. I feel that I have settled in and I have now done almost 700 pieces, including about 150 this year, here’s a look at some of my highlights of the year.

There was plenty of excitement in pop music as the story I told about Bananarama on here that I think will always be my favourite blog piece took some further twists this year. Firstly, I found a picture on Instagram of Siobhan in a pub that I know that surprised me (and she was alongside Brix Smith who definitely had an interesting music career in the 80s too). I still honestly can’t believe that I have walked the same path in life (I don’t mean our careers of course, I mean literally the same Bethnal Green streets) as someone who fascinated me (along with many other people) with their chart-topping single back in 1992.

Not long after, a picture appeared of Siobhan alongside Marcella from Shakespear’s Sister, by all accounts the first time they had seen one another for 25 years which was really something unexpected. That all of this has actually happened still makes me happy. It’s good to know that she’s still out there but I haven’t looked at Siobhan’s Instagram page for a while now because as you see I usually get more than I bargained for…

I also did a three-part series looking back at Bananarama’s hit singles, and I reviewed Keren and Sara’s appearance on BBC1’s Pointless Celebrities. Well five years on they appeared on the show again, and managed to maintain their unbeaten record as they reached the final and this time they won the money! They made great records in the 80s, they’ve been to Bethnal Green, they win TV game shows… what’s not to admire? And it seems that there’s a new tour and album on the way too, I don’t think Siobhan is involved in these though, but who knows maybe I’ll see her in the pub one day.

I was also surprised by just how many 80s pop stars had their 60th birthdays this year. Siobhan was one of them in September, and 13 days later another one was Danielle Dax. To celebrate this I decided to do another piece about her career because I thought that her work was fascinating and there should be more about her online, and this received a positive response. After completing it I found another article about her in Number One magazine in 1984, with a full-page colour picture and everything. I also found an interview from the same time where she said that one of her icons was Cruella de Vil and I honestly don’t know if she was being serious or not. 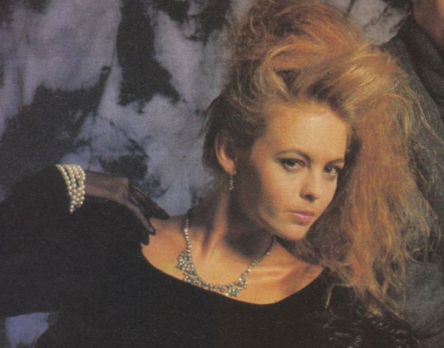 Oh, and remember when I found a picture of Danielle from a year or two ago at a gig in Dalston where I said she had bright blue hair which I thought was odd, but I teased people by using a picture of Stormer from great 80s cartoon Jem instead? Well recently when searching online I found a picture captioned “Danielle Dax, 2018”, which is the best post-1991 picture that I have seen of her. So if you really do want to know what she looks like nowadays…

I also looked back at the hits of 80s music stars Haysi Fantaysee and Hazel O’Connor. Not long after I received a tweet from the woman herself who also retweeted the link to the piece, making it become my most-viewed blog piece that I did this year, I was thrilled and it made all the work I put into it worthwhile. I didn’t tag her in the link so there’s the positive side of vanity searching I suppose, what an endorsement. Well it’s more than Kate Garner did.

I also came across two shows this year that I previously had no knowledge of that I really enjoyed. The first of these was ITV’s drama and music series Jangles which starred Hazel O’Connor (I also noticed recently that one episode features another early-80s singer who was Honey Bane of “Turn Me On Turn Me Off” fame). I must admit that I really became fond of the bizarre character Herald (“obliging those who wish to blow their minds…“) and he is now one of my unsung TV heroes. 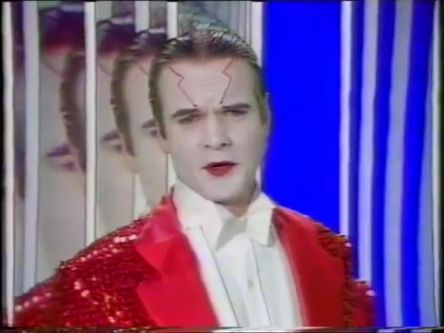 The other one was BBC2’s The Wolvis Family, an early-90s sitcom about a rather bizarre family that was described by the Radio Times Guide To TV Comedy as “a forgotten gem”, and that’s a statement I can’t argue with, it definitely deserves a DVD release. And the character of Mr Wolvis became another one of my favourites. Other long-forgotten comedy shows I enjoyed reviewing this year included BBC2’s It’s A Mad World World World World, ITV’s Not With A Bang and Channel 5’s Hospital! 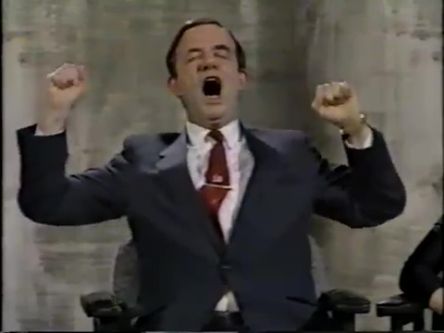 As for game shows, I decided to review Quizmania as Greg Scott and Chuck Thomas who were among the hosts are both following me on Twitter and I hoped that it might catch their attention. I was very flattered that they both approved of the piece, with Greg saying that he was pleased by how many people still remember the show so long after it ended and Chuck giving it a like.

I also reviewed the revivals of The Crystal Maze and Who Wants To Be A Millionaire (who knows, maybe they’ll revive Blockbusters one day…), along with some American versions of classic game shows including Cross Wits and Play Your Cards Right. Also this year we had to say goodbye to some familiar faces, including game show hosts Jim Bowen and Dale Winton, and children’s TV stars Barry Chuckle and Geoffrey Hayes. Thanks for lots of great memories. 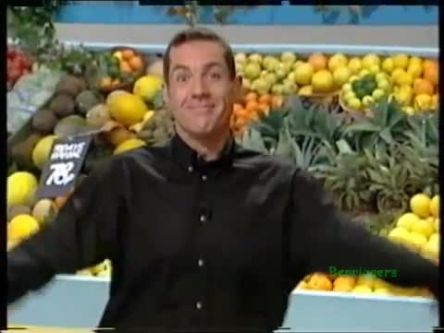 I also looked back at a few other interesting shows including ITV’s Wake Up London, BBC Choice’s Hotlinks, the news coverage of the death of Diana, I admitted that I did admired the ITV Weathergens, and it was also enjoyable reviewing lots of old adverts. CBBC and CITV shows that I reviewed included Radio Roo and Mega Mania. There are plenty more reviews of classic TV memories planned to come in 2019.

My blog has had over 41,000 views this year. All that it remains for me to say is thanks for reading wherever you may be, and special thanks to everyone who liked and commented, it is much appreciated to know that you enjoy what I do!