Here’s another group who briefly enhanced the singles chart for me in the late-2000s, even if they didn’t get the critics too excited, and I imagine there may not be too many people who’ll remember them now. The Hoosiers are a British trio who formed in the early-2000s. In June 2007 their debut single “Worried About Ray” was released, and became their first Top Ten hit.

This one was a celebration of the career of Ray Harryhausen, who was known for making pioneering special effects for various successful films, and they imagined him as he sat there working on his figurines all day long and his eyes were starting to go all blurry. Although this did mean that every interview they did around this time began with them being asked “how’s Ray?”.

I did like the quirky style of this one, and looked forward to what they would do next. In October 2007 the follow-up “Goodbye Mr A” was released, which was their biggest hit, although it would also be their second and final Top Ten single. This one contained another entertaining story where the band imagined themselves as superheroes. This was followed not long after by the release of their debut album “The Trick To Life”, which was a chart-topper for one week, so they clearly had managed to build something of a decent-sized fanbase.

“Worst Case Scenario” didn’t make the Top 75, but In April 2008 “Cops And Robbers” just missed the Top 20. And also around this time, there was a rather amusing TV advert promoting the album, featuring the band who seemed to insist that despite their success, the average pop music fan might know much about who they are. “Apparently no-one’s heard of us. We’ve had two hit singles!” protested their frontman… er, what was his name again? 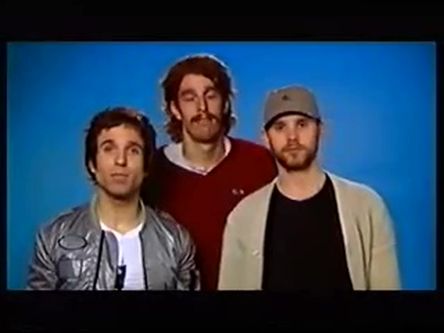 The Hoosiers returned to the chart in August 2010 with “Choices”, which just missed the Top Ten, and turned out to be their final hit single all together, and in the same month the second album “The Illusion Of Safety” did make the Top Ten. Although they haven’t featured on the chart for over a decade now, it does seem that they are still together, although there have been some line-up changes, and they have made four albums.