This is the kind of show that this blog was designed to cover, as this came and went from the TV screen rather quickly, and it was also rather weird. First of all, I’m fairly sure that this was shown in the post-The Chart Show timeslot on a Saturday afternoon, and there weren’t many editions, indeed this could’ve been a one-off. I also thought that this might’ve only been shown in the LWT region, but as this was a Granada/Carlton/Central co-production, maybe it wasn’t.

Around 1993 the comedy double-act of Kid Tempo and The Ginger Prince (so-called because he had a ginger beard presumably) started out on various radio stations, and then in 1994 they hosted Tip Top TV (not to be confused with that cream that you used to put on your pudding). Tip Top stood for “Totally Integrated Panoramic Transmission Of Pop”, oh right, if you insist.

Tip Top TV was almost presented as if it was a pirate taking over the signal (there were some cases of pirate TV stations in London a long time ago, but they are much more rare than pirate radio). This show was presented by Kid Tempo in the studio, that consisted of a big desk, and lots of women at tape recorders, while The Ginger Prince was alongside the musical acts. First up were Let Loose, who really were a big group at the time.

Other features included The Tip Toppers (who seemed to be rather familiar to The Banana Splits), Girls Today, who did a dance routine, The Pop Gallery, and a puppet that rather enjoyed Blur (I began to get a Doobie Duck off CBBC flashback from this one), and it by was point things were beginning to resemble a rather trippy retro edition of Top Of The Pops.

And there were also performances from hot groups Echobelly (who appeared on the cover of Melody Maker, proof that they were rather fancy), Roxette, D:Ream, and Eternal. You could even join the Tip Top club. Yes really, you could, and you would receive a membership number along with a newsletter containing everything you needed to know. Lots of people were very eager to join and spread the word.

Tip Top TV wasn’t the end of this though. From 1995-1996, there were two series of Radio Tip Top on BBC Radio 1. This was a mixture of comedy and music, and every hour-long edition was brought to listeners by the magic of Lunewyre Technology in Total Spectrasound. This came from The Starlight Ballrooms, and their aim was to put the fizz back into pop music. 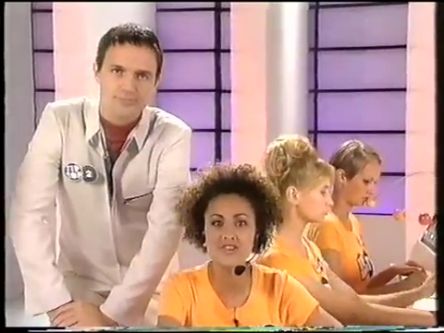 It seems that there were also various sketches, and Britpop was mixed in with many other genres of music. I don’t remember this at the time, but there are a few editions online, and I think that it could be a good idea to take a listen to them, as there’s a chance that this could be my kind of thing. And in 1996 they released a cover of M’s “Pop Muzik”, but this wasn’t a hit. After this ended, they vanished off the scene, but they definitely had a unique approach to presenting 90s pop music.