This is someone who had a brief moment of pop music fame in the 80s. Gary Byrd (although this one was actually credited to “Gary Byrd And The GB Experience”, whoever they may be) was an American singer/rapper, and in July 1983 (what a terrific month that was), “The Crown” was released, which reached no. 6 in the UK (but missed the Top 40 in America). Now I think that there are plenty of interesting things about this one.

Firstly, this was a rather long and ambitious song, as Gary tried to cram the story of about 2,000 years of history into almost 11 minutes, meaning that if the lyrics were published in a magazine such as Smash Hits, they would probably fill two or three pages. And there was no video either (although Gary was interviewed on some TV shows), so when this featured on Top Of The Pops, there was a dance routine by Zoo, although this had to be condensed to about three minutes. 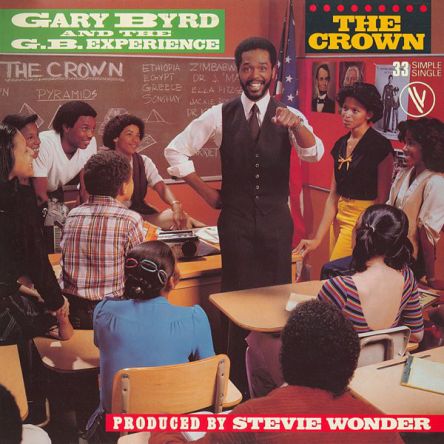 It would’ve been great if this had been played in full, but it would’ve taken up about a third of the show. And then there was a guest uncredited contribution from Stevie Wonder (who was also the co-writer and producer, and this was even released on his own label in America). This was a time when Stevie seemed to feature on a lot of hit singles (such as Eurythmics’ chart-topper), maybe he decided that he’d play his harmonica for anyone for a decent price.

I imagine that there is also a chance that this is probably the only hit single to reference a slogan for a cassette manufacturer (“is it you or is it Memorex?“). Also among the backing singers was Teena Marie, who had some hit singles of her own, and this was a song with a message worth listening to. Although “The Crown” would be his only hit single in the UK (with no success for any further singles or albums), this wasn’t the last that we would hear of Gary.

After this, he went on to become a presenter on BBC Radio 1 for a few years, and he featured on various shows, including Sweet Inspirations, a late-night show from 1984-1985 that played Gospel music, and this was followed in 1986-1987 by The American Chart Show, where Gary revealed what the biggest hits stateside were, direct from New York.