Here’s a look at another unusual pop music story from the 80s. Dorothy Sherratt was born in Glasgow, although by the time she had entered the music business in the 70s, she had changed her name to Natasha England. Her first single was as a member of Flirts in 1979, and she then released the first of her 11 solo singles “Breakin’ Down The Walls Of Heartache” in May 1980 (although this was actually credited to Natasha And The Delites).

In June 1982 she caused something of a stir when her fourth solo single that was a cover of “Iko Iko” was released. In what seems to be something of a curious coincidence, in the same month The Belle Stars also released a cover of “Iko Iko”, meaning that both of these were on the singles chart at the same time, and there was some interest in who would come out on top in this chart challenge. It seemed that you couldn’t like both and had to take sides. 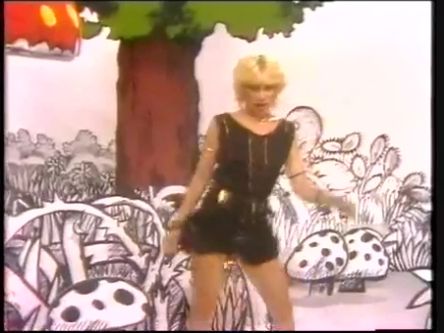 As it turned out, Natasha did the best, reaching no. 10 (although this was her first and only Top 40 hit), 25 places higher than The Belle Stars, but they would later go on to have a Top Ten hit, so things eventually balanced themselves out. Natasha performed “Iko Iko” twice on Top Of The Pops, there was a rather odd video, and looking back at promotional pictures from around this time I couldn’t help but notice her rather advanced state of undress in them.

So once again, it was expected that the next single would do well too. In September 1982 “The Boom Boom Room” was released, and this was performed on various shows including Hold Tight rather high up on the big game board, which looked rather scary, she definitely had more of a head for heights than me. This only made no. 44 though, and in October 1982 her first album “Captured” was released which reached no. 53.

Natasha went on to release more singles including “Pata Pata”, and made a few more TV appearances. Her final single was released in 1985, but her moment of fame had passed by this point, and she left the music business not long after. Many years later Natasha did return to the scene though, released an album as recently as 2018, and there is also a website taking a detailed look back at her varied career.