This isn’t a song that I was incredibly excited by at the time personally, but I do remember this one and wanted to feature it because this gives me a chance to write about genres and hype during this era. At this time, music magazines used to enjoy putting bands into various genres, and sometimes these seemed to be invented on the spot. The bands involved seemed to be surprised too, especially when they insisted that they didn’t want to be pigeonholed.

Readers often wrote in to ask why various bands and genres were being covered, and they would defend this by saying that it doesn’t matter about the origin, as long as they felt it was something new and exciting, they would cover it. In 2002, there was briefly a lot of buzz about “electroclash”, with a mildly desperate “this really is the most exciting scene around!”, and this group were pushed to the forefront of all this. 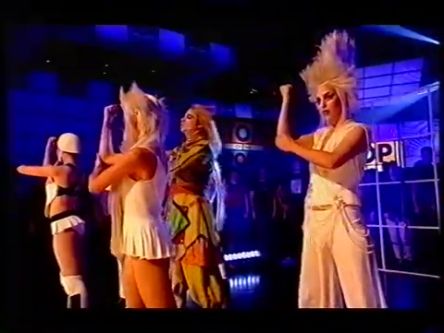 It all seemed to centre on them as to whether this would be a success. Indeed, they might’ve actually been the only group in the genre, which featured some fancy electronic noises. Fischerspooner were an American duo that formed in the late-90s, consisting of Warren Fischer and Casey Spooner. In July 2002 they released “Emerge” (for a second time) from their first album “#1”.

Their stage shows also caused something of a stir, they were reported to be rather expensive to mount, taking things to the extreme, with lots of sets, elaborate costumes, and sparkly bits everywhere, they soon gained a fairly trendy fanbase who liked to dress like them. They felt that as well as the music, the look and performance was just as important, as how songs are interpreted is a piece of art in itself, and they definitely stood out, even if this could be seen to be an extreme example of style over substance.

“Emerge” reached no. 25, and you can imagine how much joy there was from the fans, can you believe it, this really was the pinnacle of the genre! This led to a memorable Top Of The Pops appearance that turned out to be their three minutes of fame. And somehow, even though they released many more singles and albums, Fischerspooner had no more Top 40 hit singles, although “Emerge” has featured on several film and TV soundtracks, and they split in 2019. People weren’t really surprised when this overhyped genre vanished as soon as it appeared. Maybe it never existed at all.