Having been interested in the career of comedy double-act David Mitchell and Robert Webb, here’s a review of their stage show that was released on DVD. By this point, Mitchell and Webb had become a success, mostly thanks to their sitcom Peep Show, they went on to star in sketch shows on the TV and radio, and they turned some of the most popular characters and highlights into a tour.

The performance on the DVD was recorded at The Grand Opera House in York. It seems that one positive thing about going on tour is that you get a big curtain with a picture of your face on it. One trouble though is that you have to do several fast-paced costume changes behind the scenes, and then make sure that you came back on stage in time and don’t miss your cue, or indeed forget your dialogue, so everything has to be planned and rehearsed carefully, make sure those wigs are at the ready. 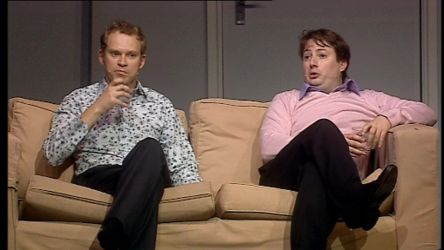 The supporting cast were James Bachman and Abigail Burdess (also Webb’s wife). Some of the sketches performed that went down well with the theatre audience included the promotion for endless football coverage, the tramp Sir Digby Chicken-Caesar, Big Talk with Raymond Terrific, the lazy writers, and the game show parodies Numberwang and Hole In The Ring. 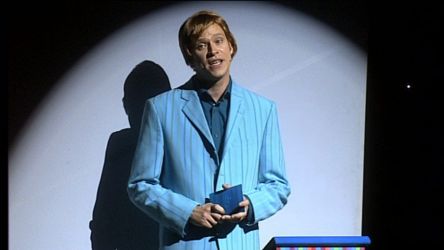 And of course there were the snooker commentators, who seemed to be more interested in talking about how fond they were of the young players. They appeared twice, and finished off with their special song, which was well received, much in comparison to when they also performed this sketch live on Comic Relief one year with some snooker stars and died on their backside. 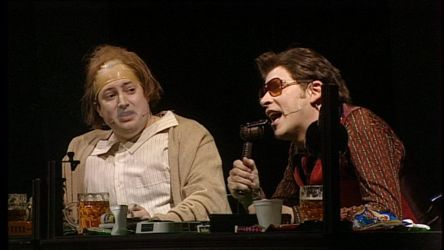 A lot of sketches were packed in, and plenty of them were sharp and witty, that’s why people have described them as their generation’s Fry and Laurie. This tour ran for 44 dates across the UK and got good reviews, but they haven’t done another one since. The only extra is a trail for their film Magicians (that I reviewed recently), although you can also text a number to get fancy Mitchell and Webb ringtones.