The Mighty Boosh is a comedy show that I really enjoyed, it was very strange and like little that I had seen before on TV. After this ended, the double-act Noel Fielding and Julian Barratt went their separate ways to some extent, and when I saw that this film starred (and was co-written by) Barratt, I definitely wanted to give this one a go.

In the late-80s, Richard Thorncroft starred in Mindhorn, a TV series featuring a detective on the Isle Of Man who had a cybernetic eyepatch. This meant that he could see the truth in a rather literal sense. He was suave, he was sophisticated, he even had a moustache. “You can’t handcuff the wind”. Yes, that was his catchphrase. But when the show ended, his career tailed off, and he has barely been seen since, apart from a few adverts. He didn’t go on to further stardom in the 90s as expected, while spin-off series Windjammer did really well.

When there is a threat on the usually sleepy island for real, Richard can’t resist the opportunity to become a crimefighter all over again 25 years on and wear the eyepatch one last time. This would be his chance to return to the big time. Only the years haven’t really been that kind to him. He’s past it, he’s gone thin on top, and his stomach is protruding. He’s living in Walthamstow on past glories that only he considers to be rather glorious, and his collection of now-yellowed newspaper reviews are the only evidence that all this happened.

Richard also reunites with his former co-star Patricia who is now a news host on Manx TV. Patricia was played by Essie Davis, who is best-known for starring in the Australian drama series Miss Fisher’s Murder Mysteries. I don’t usually watch shows in that genre, but I was fascinated by her classy flapper character. And well, I never thought I’d be able to connect that show to The Mighty Boosh in only one step. 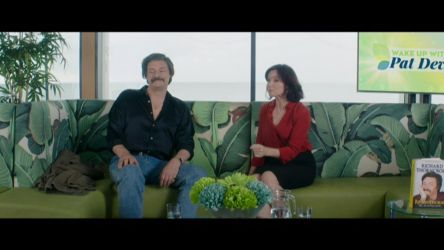 The Kestrel is on the loose, and he is a big fan of Mindhorn, so only one person can help out and bring his reign of terror to an end. He even had every episode of VHS (because there’s been no DVD release). Richard takes the opportunity to become a hero, and is soon back in the news, he’s at the top of his pinnacle again. Unsurprisingly, everything ends with a big shoot-out, but who will survive?

Mindhorn also starred Russell Tovey and Steve Coogan, and there were guest appearances from Kenneth Branagh and Simon Callow, who were big fans of Richard’s work. Extras include a look behind the scenes, an in-character interview, and a music video. Overall this went down rather well with critics, and it was good seeing Barratt doing something much less surreal than The Mighty Boosh that was still rather entertaining.