This is a sitcom with a very bizarre idea. Firstly, At Home With The Snails was written by and starred Gerard Foster. In 1997, Trevor And Simon were dropped as the comedy act on Live & Kicking, after appearing on CBBC Saturday Morning shows for about a decade. They were replaced by a new act called Men In Trousers, who had also featured in a radio series under the name The Cheese Shop, and Foster was on the team. This was something rather different though.

At Home With The Snails featured the rather odd Fisher family. Foster starred as Alex, who lived in Oxfordshire and main interest in life was snails. He really liked snails. He had hundreds of them, he couldn’t get enough of them, letting them slide everywhere, and he gives them all names. There is some comedy created here from the old joke of naming things after random B-list celebrities, so Alex would remember things like the time when he had to bury a snail called Mark Goodier.

Alex’s dad is George (Geoffrey Palmer). Now Geoffrey was a great talent, and was someone who had one of those voices that meant that it was always a pleasure to hear him, although this scenario is a long way from the much more cosy world of the likes of As Time Goes By. George is a professor who is writing a book about his life and career, and he can’t really believe what his son is up to. 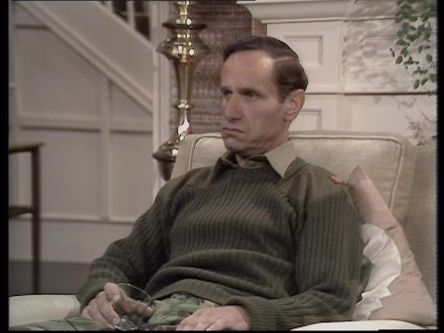 Alex’s mum is Beverly (Angela Thorne), who often likes to walk around Brixton, knits unusual things, and works in hospital radio. Alex’s sister is Rose (Miranda Hart). Now this was long before Miranda’s successful sitcom launched on TV, and this must be one of the earliest things in her career. Rose works in a chocolate shop and sells some rather unusual things. Her heart is in the wrong place though (literally), as it is pressed under her armpit, meaning that she has a bright red face, and could have a heart attack at any moment.

As the episodes progress, the situation becomes increasingly bizarre. By the second series, George and Beverly fake their own deaths, insisting that they have been killed in an avalanche. They then take the opportunity to put cameras in Alex’s house to check on his snail-related activities. Alex also gains a Swedish girlfriend called Hosanna (Debra Stephenson), although she soon realises that it’s the snails he loves the most.

By the end of the series, Alex wonders if it is possible to be able to turn into a snail himself, much to the shock of the rest of his family, and his parents give him a surprise by turning up suddenly to try to talk him out of it. George realises that Alex’s story could be turned into a book too. Well it’s rather clear that this is no ordinary family, and there definitely haven’t been many other sitcoms that have gone off in the directions that this one did in the eight acclaimed episodes that it ran for.