Here’s a look at another group that had a brief but memorable moment of fame, this one coming early in the 90s decade. Candy Flip were a duo who formed in the late-80s, consisting of Ric Peet and Danny “Dizzie” Spencer. In March 1990 they released a rather trippy version of “Strawberry Fields Forever”, originally a hit for The Beatles in 1967 of course, which was already rather out there. This version, which was on the wave of the rise of rave culture and “Madchester” in pop music, reached no. 3, and this led to an appearance on Top Of The Pops, they were so proud.

Now I know I do go on about her a lot, but again I can’t help but be reminded of when also in 1990 Danielle Dax released a rather trippy cover of a song by The Beatles, this one was “Tomorrow Never Knows”, but this wasn’t a hit, Candy Flip had already done a similar thing and were much more successful with theirs. But would they make the Top 40 again? In July 1990 the follow-up “This Can Be Real” was released. Now this was a rather memorable and warm summer, could another helping of their feelgood vibes go down as well?

Well not really, as “This Can Be Real” reached only no. 60, but it did spend four weeks on the chart. The video was shown on The ITV Chart Show, and they also appeared on The 8:15 From Manchester, which I’m sure was very exciting, but it turned out they would only make the Top 40 once. Another interesting thing about Candy Flip is that would you believe they had not one but two Smash Hits covers, making them among a very small group of acts who had more Smash Hits covers than they did Top 40 singles.

Their day-glo shirts or whatever they were called weren’t on the scene for much longer though. “This Can Be Real” turned out to be their second and final hit, their next singles didn’t make the Top 75 at all, and their only album “Madstock… The Continuing Adventures Of Bubblecar Fish” also failed to chart. They did return to the chart almost a decade later in April 1999, when they had a further minor hit, this time under the name Sound5. 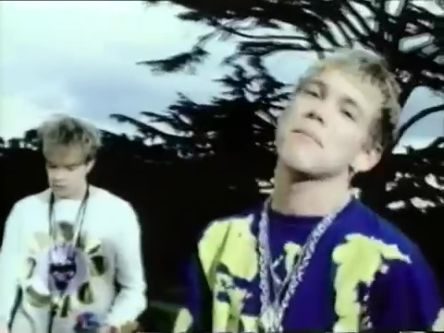 Whatever happened to them after this though? Like some other acts that have been featured in this series, after the end of their hits, Ric and Dizzie have gone on to have further success behind the scenes in the music business with production, songwriting and engineering, working with various bands, among their most high-profile work being contributing to a couple of Robbie Williams albums.