This is one of the perfect examples of an act that came and went very quickly, and yet their most famous moment has endured for longer than most chart-toppers from this era. There has been a lot said about the advancement of music production technology to the point where you could create songs at home, even in your bedroom, and it’s not too much of an exaggeration to say that was how this one was created.

There was first a buzz around “Your Woman” when Mark Radcliffe made this the Record Of The Week on his BBC Radio 1 show. Now I listened to this show a lot over the years, and it was often said that Mark had the “reverse Midas touch”, with a lot of his choices getting nowhere near the chart, and people were beginning to say that they didn’t want their songs to be his Record Of The Week as it would finish them off. So according to the law of averages, there would have to be a song that would create a huge interest and instantly top the chart out of nowhere, and that’s what happened here.

This song by an unknown act was receiving the high-profile radio exposure that most bands and labels would be desperate for. When “Your Woman” was released in January 1997, it spent one week at Number One, with people being intrigued by the mix of trumpets and keyboards, along with the cryptic lyrics. However, White Town was another act that could be classed as “faceless” to some extent, as very little was known about them. The single caused such a stir all by itself that it barely needed to be promoted by anybody anyway.

There was a black-and-white video made, but that was about it, and Top Of The Pops had no other option but to show this. It was later revealed that White Town was the work of Indian-born Jyoti Mishra, and he had been making music at home since the early-90s. He later commented on his success “I’m glad that a porky Asian bloke’s been to Number One, because it’s different”. “Your Woman” also did well around the world and reached no. 23 in America. Well this was a very interesting story about how to have a chart-topper in an unconventional way, but would anyone be interested in his next move? 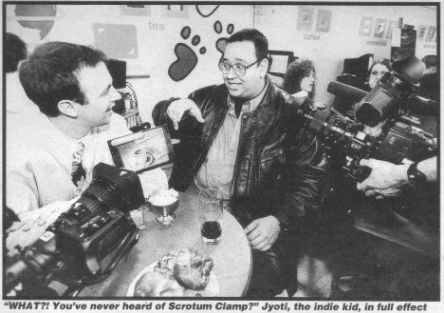 In March 1997 the album “Women In Technology” was released, but this reached only no. 83. White Town did eventually have a second hit single in May 1997 when “Undressed” was released, but this all seemed a little underwhelming by comparison, and reached only no. 57. “Your Woman” would be a hit again in August 2005 when Tyler James released a cover version, it has also been sampled on several songs, and White Town has gone on to release five albums.

All these years on though, a lot of people still seem to be very fond of “Your Woman”, and Mishra seems to be content that he can say he had a big hit single. And guess what, when looking online for more about his career, I found a video of Mishra performing “Your Woman” in 2017 at a church in Bethnal Green, not too far away from where I live. These pop stars just can’t keep themselves away can they.