Let’s continue this series about pop stars whose careers tailed off fairly quickly into the 90s, and begin with a look back at, er, the end of that decade. In December 1999, something rather curious happened on the singles chart. Lots of acts released singles at this time, with the idea behind this seeming to be that it would be an honour to be on the final chart of the year/decade/century etc. But this resulted in a crash with a surprising amount of acts who had been doing well missing the Top 40 all together with their next release.

One of those was Lou Bega, who followed his chart-topping “Mambo No. 5” with an unexpected flop, and also this group. Thunderbugs were a female group, and the twist with them was that they were from various countries. So while two of them were English, one of them was French, and one of them was German. Maybe this would help them appeal more to a European market. And one of them wore glasses, can you believe it. They were also sometimes compared to the similar all-female group Hepburn who were briefly successful around this time.

There had clearly been a lot of money put behind Thunderbugs, and in September 1999 their first single “Friends Forever” was released, which reached no. 5. This led to appearances on shows including Fully Booked and Top Of The Pops, everything seemed to be going well, and it was presumed that there would be plenty of anticipation for their next move. Their second single would be “It’s About Time You Were Mine”.

Now I liked this one more than “Friends Forever” myself, I remember that it was played on the radio a lot in December 1999, and it was also featured on the “Hits 2000” compilation. So there was widespread surprise when “It’s About Time You Were Mine” reached only no. 43, bringing a rather abrupt end to their career. The video doesn’t even seem to be online, although I have found a clip from a TV show going behind the scenes of its making. 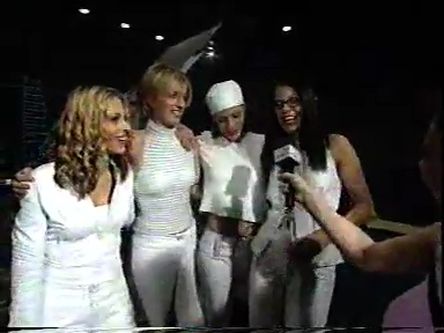 They did get as far as releasing their first and only album “Delicious”, but this was practically ignored by everyone, and Thunderbugs were never heard of again. Maybe it was a case of bad timing, if the second single had been released early in 2000 when the festivities had trailed off a little, maybe it could’ve done better. It was almost as if there really was too much pop music around at the time to fit it all into the Top 40.