This is a piece about another news show that I remember. These shows aren’t incredibly interesting to write about really, but I thought that I might as well do this one because I think that there are a few things worth pointing out. Working Lunch was usually shown live on weekday afternoons on BBC2, and it was all about the world of business.

Now this isn’t really something that I have a huge interest in, but Working Lunch turned out to be much quirkier than most news shows, and managed to stand out, which is why I would occasionally have a look whilst channel hopping. Firstly, there was the opening sequence, which featured a goldfish being chased by a shark in a tank, and the goldfish seemed to become the show’s mascot. The show also came from a high-tech (for the time) virtual studio.

And then there was the show’s main host, Adrian Chiles. Now although most of the information that he was passing on went over my head, I definitely did enjoy his hosting style. There were a few other features on the show, including Shaw’s Shares, where co-host Adam Shaw gave us the latest updates about what was happening on the stock markets, and where the FTSE was currently trading, which is very important to a lot of people.

There were also reports from a trusted team, along with guests in the studio, and features included some amusing cartoon representations of various things, along with always trying to champion the consumer. As the years went by, Chiles seemed to increase in profile, which I was pleased about, and he was soon appearing on other shows. Chiles left the show in 2007 and went on to host The One Show (which I never been the interested in that much myself, but Chiles seemed to do well).

His next step was interesting, as shortly after he was poached by ITV to become the main host of their football coverage (Chiles is a famous West Bromwich Albion fan). This meant that he was suddenly travelling around the world to host Champions League and World Cup matches. He handled it as well as some of his predecessors did, including Elton Welsby, Des Lynam, and, er, Matthew Lorenzo, but he has now left, and nowadays you are most likely to come across him on the radio. 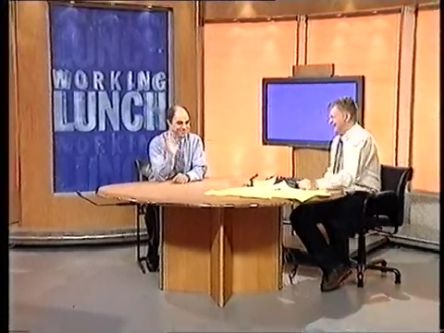 As for Working Lunch, Shaw left not long after Chiles in 2008, and the show did relaunch and try and carry on with a new hosting team, but it was decided to end it all in 2010. I suppose I remember the show for being an unlikely source of humour as far as news shows go, even if I know nothing about finance it all definitely caught my attention.