It’s time to have a look back at another Christmas special, well it’s that time of year again. This special was hosted by Matthew Kelly, who had become the new host in 1993, and left in 2004. Although Stars In Their Eyes can be classed as a game show, this special didn’t contain a competitive element, as some of the most memorable performers were invited back to go through those famous doors again and bring us some festive cheer. It was much more interesting than the endless celebrity specials the show eventually got bogged down in.

Matthew wore a rather spectacular waistcoat even by his own standards. It was clear that this was a special occasion, as there was a live studio orchestra, who usually only appeared for the series grand final. There were also plenty of decorations around, and the studio audience had their party hats ready. You’d be seeing musical stars perform together that you’d never previously thought possible, partly because they weren’t the real singers, but you’ve probably realised that. Here’s some of the highlights. 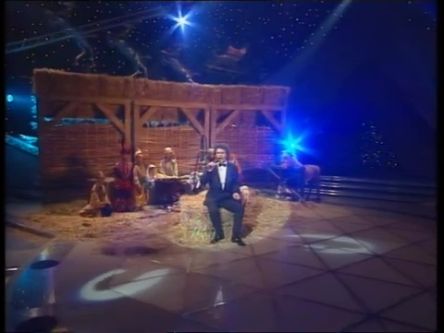 As we’ll see, it’s not only the singers that we are going to see on stage, because one performance includes a nativity scene. This really is going to be an exciting show, and we are then offered the unique combination of Madonna and Cilla Black, it is a shame that they never really did do an album together, I’m sure many people will think after seeing this. Matthew promised us that this will be a special with all the trimmings, and it certainly seems like it.

Then we have a Cliff Richard impersonator with his take on “Mistletoe And Wine”, which would you believe was the biggest-selling single in the UK in 1988. This was still many years before “The Millennium Prayer” came along. Then it’s time to get ready to rock as the likes of Meat Loaf and Billy Idol take to the stage to do their thing while Elton John whips out his piano, and everybody really is in party mood now.

How can you finish off such a special? Well you bring on Elvis, the King Of Rock ‘N’ Roll, being portrayed in his young pre-hamburgers days, alongside none other than Bing Crosby. Well they don’t really make them like that any more. And then everybody gathers round at the end to say a big thank you and wish viewers a Happy New Year, as Matthew opens a big bottle of champagne and promises us that he will be back with a new series soon, which is how all specials should end.