The Big Breakfast is a show that had done well for Channel 4, especially in its early years, being rather entertaining and lively, and attracting a lot of viewers. But having to produce two hours of live TV a day five days a week all year round soon took its toll, and when the show came to an end after almost a decade in 2002 it did feel like it was past its best.

So it was decided to launch a new show in the breakfast slot, which promised to be a fresh take on all of the latest important news (but don’t they all claim that), but this one would, not to that many people’s surprise, turn out to be a flop by comparison. I didn’t watch this one a huge amount, but why it exactly failed with viewers has interested me.

Rise (or RI:SE as it was sometimes written, aiming to simulate the display of a digital alarm clock) came from a TV studio, and had a collection of hosts who were rather in vogue at the time. These included Mark Durden-Smith (who seemed to be everywhere around this time), Kirsty Gallacher (who had impressed on Sky Sports), and Edith Bowman (who was also on MTV). And would you believe it, despite their abilities, when you put them all together around a desk, there was practically no chemistry between them whatsoever.

The news coverage aimed to be something a little different, by being hosted in front of a big screen where all the reports were summarised in a single word. The show also jumped on the success of Big Brother, giving us some live coverage from the house, that usually only consisted of some people asleep. There were plenty of music videos and celebrity guests too. And you could even email them, how incredible.

It wasn’t too much of a surprise that this didn’t go down well with viewers, and sure enough it wasn’t long before the constant relaunches, with all of the original line-up and the big desk long gone, and over a dozen hosts were used in Rise‘s short time on air. Among those who joined later were Iain Lee (who had previously hosted Channel 4’s The 11 O’Clock Show and had a more sarcastic take on the news).

And also featuring were the double-act Mel And Sue, who practically revived their Light Lunch format that had done well on Channel 4 in the afternoon about five years earlier. Not that many people were surprised when Rise finally ended in December 2003 after nearly 18 months, indeed some viewers didn’t expect the show to even last that long. 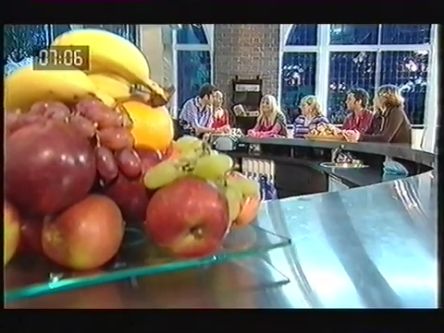 There are only so many times you can relaunch a show though that isn’t attracting the viewers. And after this, Channel 4 practically gave up on creating new programming for the breakfast slot, deciding from 2004 to fill the time instead with endless repeats of American sitcom Everybody Loves Raymond. And remarkably, almost 17 years on, they still do. Just how many episodes were made?