A while ago I looked back at some advert breaks that were shown on the Sky Channel in the 80s, which at this point was available on satellite in various countries across Europe. One of the shows that was promoted a lot looked rather interesting, so after having a look for some more clips on YouTube, I thought that it was worth a full review.

Back in the days of the Sky Channel, when they weren’t showing some imported sitcom, they filled most of the time in the morning and afternoon for hours on end, with Sky Trax, a music show coming from a cupboard in London featuring various hosts who introduced music videos, along with plenty of news and interviews with the biggest pop stars around at the time. “Are you going on tour soon?” is about as probing as the questions got. Well it was either this or more editions of The DJ Kat Show. 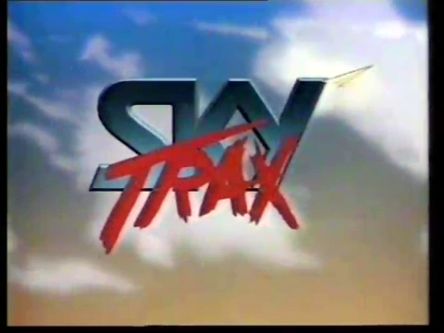 There can’t have been a huge amount of viewers, but the average pop star wouldn’t miss any opportunity to promote their latest single on TV. Among the hosts was Pat Sharp, who had a terrific hairstyle even back then. Pat had worked in TV and radio long before Fun House, he hosted Top Of The Pops as early as 1982, and by this point he was a success on Capital FM.

And there was also Gary Davies, doing some moonlighting from his Sloppy Bit on BBC Radio 1. He hosted various features, including Young, Free And Single, and The Great Video Race. There were also shows dedicated to various genres and charts including Monsters Of Rock, Nescafe UK Top 40, and Soul Spectacular. You never knew what was going to happen next, and things often went with a bang!

Gary was also among the hosts of The Eurochart Top 50, which was somewhat similar to Top Of The Pops, and he was always pleased that there were plenty of great records going up the chart. Gary must be fond of this era of music, as he is now the host of Sounds Of The 80s on BBC Radio 2. A few other familiar names were among the hosts, including Tony Blackburn, David Jensen, and Peter Powell. 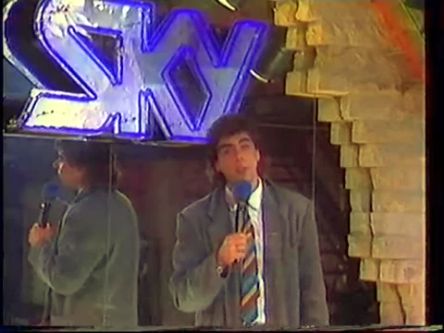 There was even a spin-off compilation album released called “16 Solid Hits”, and I’m sure they were. Sky Trax all these years on is a great archive of pop music from the mid-80s, it wasn’t all rubbish, honest. In 1989 though, the show came to an end when the Sky Channel was relaunched as Sky One, and they would now show revivals of The Price Is Right and Sale Of The Century all day.

Along with Sky Trax, there were some other satellite and cable music channels in the 80s that had a similar mix of videos, interviews and features. There was Music Box, which in 1986 was also shown overnight on Yorkshire as they became the first ITV region to experiment with being on air 24 hours a day, and also the Super Channel. Who needs MTV when you’ve got this.