This is another show that was popular in the 80s. Who would’ve thought that some old woman could turn into someone so powerful that they could rival Superman? Well that’s what happened in this one. Supergran was based on a series of books, the first one was published in 1978, and the TV version launched in 1985. The show also had a memorable opening animated sequence, and the theme music became a hit single.

One day, a granny is walking along in the quiet town of Chisleton, and is accidentally hit by a magic ray from a machine being used by Inventor Black. And now, despite being about 107 years old, Supergran can jump high and run quickly, and becomes an unlikely hero! Now that’s impressive. The main villain in the show is The Scunner Campbell along with his useless team, whose plans never succeed.

Every episode also featured a rather deep voice that introduced the story, the kind that you’re more likely to hear on those “critics are saying that if you don’t think that this is the greatest film ever made then you’re a total moron”-style trailers. Also featuring were a few children, including Supergran’s grandson, and there were some vehicles too that could fly, accompanied by some fancy special effects. 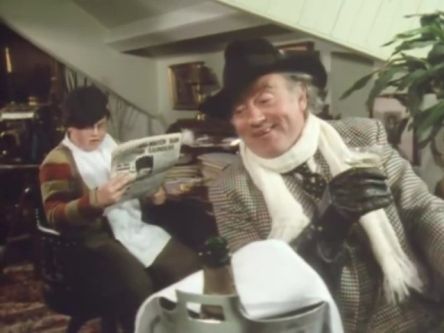 These heroics definitely caused a big stir, leading to lots of fame for our tartan-wearing star, including appearances on the covers of Lookin, and more impressively, the Chisleton Bugle. The show was also enhanced by a huge amount of guest appearances from famous faces, including comedians such as Spike Milligan, along with many pop stars and sportspeople joining in.

There were 27 episodes of Supergran in two series, including an hour-long Christmas special in 1986. The show was originally in a Sunday afternoon slot, although it seems that there were some episodes later repeated on CITV. There was also an episode shown as part of the Old Skool Weekend, and Supergran took control of the CITV spaceship in May 1985.

There were some plans for a third series, but Tyne Tees only had enough money to make this or some more editions of Chain Letters, and well, people just can’t get enough of their daytime word games, so it was bad luck. There was also an annual featuring Supergran released, along with more books, and some computer games that weren’t very well received. All of the episodes have been released on DVD by Network.