Shane Richie is someone whose profile on TV was increasing by the mid-90s, following his hosting of various successful shows including Lucky Numbers, and, er, Caught In The Act. So in 1995 he was given his own Saturday Night show on ITV that was part-game show and part-music show, and the main idea of The Shane Richie Experience is that happy a couple would get married on TV!

Three engaged couples took part in various games that were sort-of a cross between Mr And Mrs and Bob’s Your Uncle, and Shane enjoyed the chance to play Cupid. The first game would determine how much the couples really knew about each other, by being asked various questions, and hoping that the answers written down would match. Of course it was very amusing when they didn’t, but they wouldn’t score any points for it.

Inbetween all of this, Shane would sing, as would some musical guests, including big pop groups of the time Boyzone and Eternal. They would be persuaded to take part in the games too. Next was a round where the women were blindfolded and had to determine who their fiance was by touching various body parts. Again there was much shock when they got it wrong and realised they’d been fondling the bloke from Boyzone all along (although this would alternate with the men guessing the women some weeks). The lowest-scoring couple at this point are eliminated. 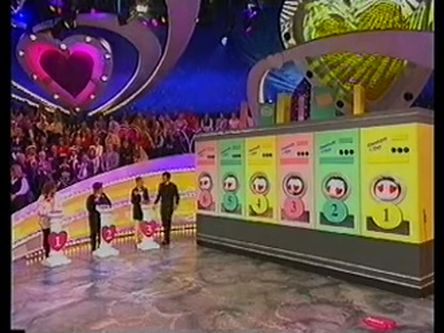 The two remaining couples then play a rather daft game against the clock in big costumes in an attempt to win some prizes. Next was the big finale, where both couples had now put their wedding clothes on, and Shane got his big bowtie out. They would be asked questions on the buzzer, and they would take a step down the stairs for every correct answer. Whoever reached the bottom first would get married there and then! Everyone would be so pleased for them, and then they would be off on their honeymoon, and there would be more music to finish off whilst they had a party.

The combination of all this was rather noisy and tacky for most viewers, so when the show returned for a second and final series in 1997, it was restructured and given the new title Love Me Do (I can’t imagine how upset Shane was by having his name dropped). Rather than in a part of the studio, couples would now play various games and compete to get married in the dream holiday destination of their choice.