There have now been a lot of shows featured in my “were there any decent 90s ITV sitcoms?” series, but this is one that launched slightly later, as ITV were still struggling to find a durable comedy format going into the early-2000s (before you could argue that they practically gave up altogether). This is a sitcom that is fairly notable for one reason.

Davina McCall is a presenter who has appeared on TV regularly since the mid-90s, usually hosting various game shows. But she became a big name following her hosting of the first series of Channel 4’s Big Brother in 2000 that did unexpectedly well. Shortly after this, Davina had a career change and went on to do some acting in a sitcom, which was shown fairly late at night on Mondays after News At Ten, so you’ll just have to sit there and wait.

Sam’s Game was simply another flatshare sitcom in a style similar to the likes of Babes In The Wood and Game On, being set in a flat in London above a high street shop. You could tell that this was a modern twist on the format though because the show featured a sofa and everything. Probably not too surprisingly, most of the episodes centre around the love lives of the characters that became increasingly complicated.

Along with Sam, the other main characters were flatmate Alex (Irish comedian Ed Byrne whose career was on the up at the time), plus neighbours Phil (Tristan Gemmill who went on to be in Coronation Street for about five years), and Marcia (Tameka Empson, who has now been in EastEnders for over a decade), and between them they all cause a stir. Also making an early TV appearance in two episodes was Shaun Evans, who has become better known in more recent years for starring in the Inspector Morse prequel Endeavour. 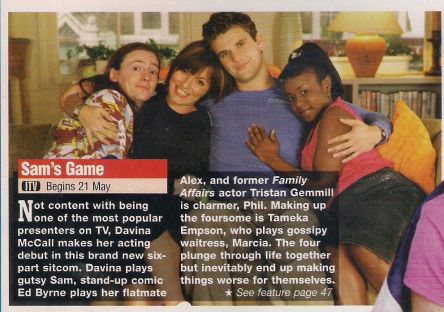 But, once again, despite trying a few ideas, Sam’s Game ultimately turned out to be yet another misfire with viewers, remaining a one-series curiosity that hasn’t been released on DVD. At least ITV showed all six of the episodes I suppose. Davina then went back to have further success in game show presenting, but this show was still arguably a better attempt at doing something a little different than a few years later when she tried to be a chat-show host on BBC1 which turned out to be rather short-lived and cringe-making.