One comedy sketch show that I have really enjoyed is Channel 4’s Absolutely, and I have followed what the cast have been in since. This includes the spin-off sitcom Mr Don And Mr George that was written by and starred Jack Docherty and Moray Hunter. It’s also another chance to go on about Jack’s own show. I find it fascinating because The Jack Docherty Show was part of Channel 5’s launch schedule when someone thought “let’s be bold and have a five nights a week chat show”, and then two years later thought “let’s get rid of it and never do anything like that again”.

The Creatives was another sitcom that was written by and starred Docherty and Hunter, as Ben and Robbie. I don’t remember too much of it from the time, but most of it is on YouTube. The show was set at an Edinburgh advertising agency that has fallen on hard times and their award-winning days are behind them. Being interested in the history of TV adverts and how they are made, I thought this was a rather interesting idea for a sitcom.

Some of the episodes were based around trying to create a memorable image and slogan for an advert, whether it be for soup or a DIY store, and trying to fit it all into 30 seconds, using various ideas and styles. If it needs 11 takes to get it right, then that’s what they’ll do. Also working there are Lauren, Rhona, and Ben’s wife Tanya, although it seems to be rather clear that their marriage is in trouble. 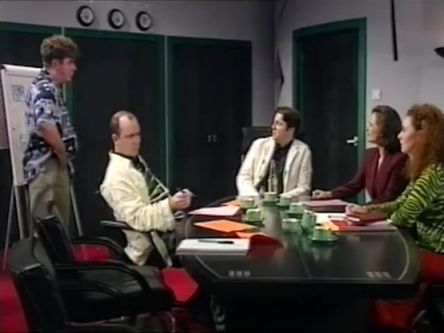 The boss of the company is Charlie, who enjoys a drink and seems to spend most of his time in meetings asleep. Charlie was played by Roger Allam. Now I am familiar with his work from more recent years, including the BBC Radio 4 sitcom Cabin Pressure, and he really does have the most terrific voice. I read once that he was born in Bow (which is not too far from where I am in London), and I thought that can’t be right as nobody from there talks like that, maybe 40 years or so at RADA knocked that out of him.

The second and final series had a different format, having more of a comedy-drama style and concentrating more on the cast’s love lives than their work. I must admit I preferred the first series really. As far as I know The Creatives hasn’t been released on DVD, and it doesn’t even have a Wikipedia entry, but it was interesting seeing another attempt to do something quirky from the makers of Absolutely.