The Muppets are characters who have appeared on TV for decades now, and they are fondly thought of by generations of viewers. They have featured in various shows including Sesame Street and films for decades, with one of their biggest successes being The Muppet Show that was set in a theatre and launched on ITV in the mid-70s (and I plan to review that one soon too). There was also the cartoon Muppet Babies, but let’s not think about that for now.

Muppets Tonight was an attempt to relaunch the Muppets on TV in the mid-90s, and I do remember watching this, including the memorable opening theme. The show was introduced by a new character who was created for this series, who was the dreadlocked Clifford (not to be confused with the Clifford in the Listerine adverts, partly because that was an animated dragon), who hosted a variety show on the channel KMUP.

Plenty of the established characters also featured, including Kermit of course, along with Gonzo, Fozzie, and Miss Piggy. Could they put this show together, and would Clifford go on the be the next Letterman? Well, not really, because despite a large amount of celebrities being rather eager to make guest appearances, they were often unaware that the production behind the scenes was rather chaotic.

As well as what was going on in the studio, there were also a few regular features, including a parody of Baywatch called Bay Of Pigswatch, which starred Spamela Hamderson, which really is one of the worst puns that I have come across. There were also plenty of other creative Muppet characters, old and new, of all colours, shapes, and sizes, who would feature in every edition.

Muppets Tonight was initially promoted with much enthusiasm with BBC1 (even earning a Radio Times cover), and the show was given a primetime slot as it was hoped that many people would enjoy their return to TV. And because the show was of American origin, as it was shown on a channel in the UK that didn’t feature adverts, there were a few features exclusively added that US viewers didn’t see to fill the extra time. 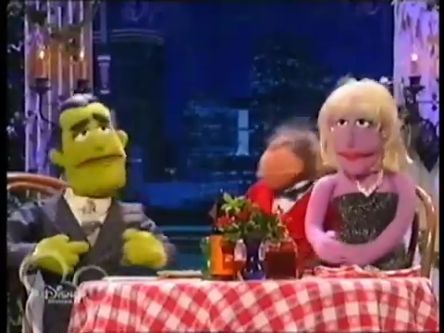 I did enjoy watching Muppets Tonight, but BBC1 seemed to lose interest rather quickly, and it was moved from its primetime slot, with the final edition going out quietly on New Year’s Eve 1996, before it vanished altogther. I think they didn’t even show the final ten or so of the 22 editions (but swapping channels in America halfway through the run didn’t help either), and I don’t recall a VHS or DVD release. The Muppets still remain very popular though, and they have featured in many more films since.