This is a CITV show that I don’t remember watching that much at the time, although I did see some trails, I do wish I had taken more notice of it, because looking back now, it’s a rather interesting one. In the early-90s, Richard O’Brien caused a sensation when he became the host of The Crystal Maze (although he had done plenty of other famous things before that of course). After leaving in 1993, what would be his next move?

Well there was an advert for Hula Hoops. Oh, and there was this as well, that was first shown on CITV in the summer of 1994. The Ink Thief was a fantasy series that was rather unusual, it could be argued that even Wizbit and its odd world and characters was straightforward by comparison. O’Brien played the main character, who tries to steal the imagination of people by sucking the ink out of books and pictures.

The show begins when brother and sister Jim and Sam come across an abandoned toy shop one day, at least they think it’s abandoned, because there is always something rather strange happening there. They soon realise that not everything is right, and they travel to various places unexpectedly trying to thwart The Ink Thief along with Miz Tipple, who always explains this by saying “it’s something to do with dimensions”.

There were a wide range of bizarre characters in creative costumes who belonged to groups of things including Oobs and Bumps, and some appeared as cartoons and computer-generated images. There were even musical interludes where the cast randomly burst into song. And just when you thought it couldn’t get any more exciting, Toyah Willcox turned up as a dog!

There was clearly a lot of time and effort put into The Ink Thief, it had a look and sound almost unlike anything else that was on CITV at the time. Being in this unusual world seemed to be rather normal to O’Brien, and he enjoyed playing his character to as bizarre a level as he could. Having always enjoyed rather odd shows, I was pleased to come across this one and be able to share its story. 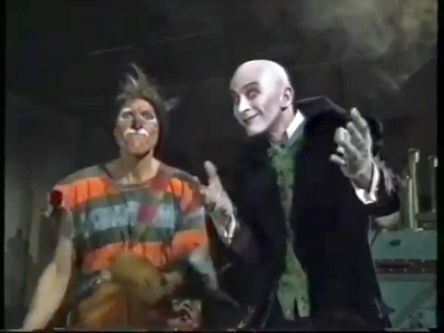 There were only seven episodes of The Ink Thief in one series, and it was repeated in 1995, and it was clearly hoping to gain a cult following with viewers. There was also a book released, along with a few episodes on VHS, but there hasn’t been a DVD release. I know I say it a lot but I am often surprised by just how untapped the area of 80s and 90s children’s TV is regarding DVDs, I’m sure that plenty of people would want to own this one.